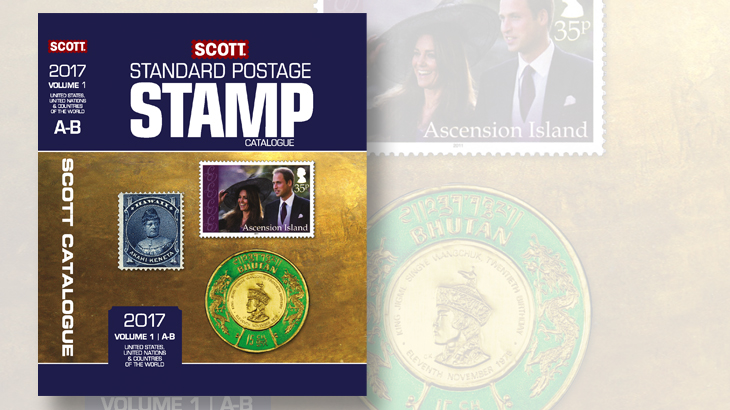 Scattered value changes can be found for 20th-century United States stamps to No. 771 in the Postage section.

More changes occur for stamps from Scott 772 to the present period, but no real trends are evident. More increases than decreases can be found in this period. For example, No. 2875b, the 1994 $2 BEP souvenir sheet with double impression of the brown panel, jumps from $300 mint to $1,100. Census figures indicate no more than 12 to 14 examples are likely to exist.

Changes are few in the United States Semipostals through Locals back-of-the-book sections of Vol. 1.

For stamped envelopes and wrappers, the recent trend of lower values continues, but on a scattered number of issues. An unused cut square of the 1884 2¢ brown on fawn (Scott U272) has been located. The value for an unused example previously was blank, indicating no examples had been recorded. The new discovery is valued at $7,000 unused. The used value remains at $2,000.

Significant value adjustments have been made among the 1907-16 Mercantile Corp. cut squares, Nos. U400-U419.

Mostly increases in values are found in Confederate States of America, with a sprinkling of decreases.

Albania topped all other countries for the number of value changes in Vol. 1 of the 2017 Scott Standard Postage Stamp Catalogue. The weak euro and an abundance of stamps available on the market has resulted in many decreases for stamps issued from 1940 to 1990. From 1990 on, value changes are mixed.

More than 68 changes in Aden reflect decreases across the board.

This year, Algeria received close scrutiny, resulting in more than 950 value changes. The focus was on those stamps issued since Algeria declared its independence in 1962. For the most part, values are down for stamps issued from 1962 through about 2001. From this point to 2011, we see modest increases for both unused (mint never-hinged) and used stamps. Stamps issued during the past three to four years see significant increases in value. Typical of this recent trend is the 2011 Ornamental Plants set of four, which advances from $5 both unused and used last year to $6.25 both ways in the 2017 catalog. The 2013 Lighthouses set of three leaps to $3.75 unused and used, from just $1.75 both ways last year.

The more than 950 value changes for Belarus are scattered throughout the entire listings. Slight increases dominate for stamp issues beginning in 1992 through about 1996. Thereafter, decreases — though modest in size for the most part — are the norm. These declines are due more to adjustments in currency-exchange rates than to supply and demand forces. However, a few declines were driven by noticeable drops in dealer prices, particularly for a few Europa sets. On the positive side of the ledger, the 1992-94 National Arms set advanced smartly from $7.65 in mint condition in 2016 to $11.80 this year. In general, topicals held steady or dipped slightly. A noticeable exception was the 1996 Birds sheets, which jumped to $22.50 mint from $20 last year.

Many notes throughout the United States listings have been clarified or expanded.

New United States errors include Scott 1305m, an imperforate between pair, on the 1968 6¢ Roosevelt coil stamp. Perforation or color-omitted errors have been added as Nos. 2975aa and 1689y.

Among the stamped envelopes, Scott U507a, the unique 1½¢ surcharge on the 1¢ blue on amber, has been expertized by the Philatelic Foundation and other experts and found to be a fake. The listing has been deleted from the catalog.

In Canal Zone, the variety of No. 12 with “PANAAM” at right, previously an unlettered minor listing in the Scott U.S. Specialized catalog, has been raised to lettered status as No. 12f.

In Alexandretta, an inverted overprint variety has been added as Scott 13a for the 75-centimes denomination of 1938. Missing “Sandjak d’Alexandrette” varieties have been added as minor listings for the 1-piaster, 4pi, and 12.50pi on 15pi stamps of this set (14a, 16a, and 17a).

A vertical pair, one with overprint omitted has been added for the Bechuanaland Protectorate 1945 3-penny Peace issue as No. 139a. The variety is valued at $17,000 unused.

A horizontal pair, imperforate between is listed as Bulgaria Scott 1015a and valued at $90.