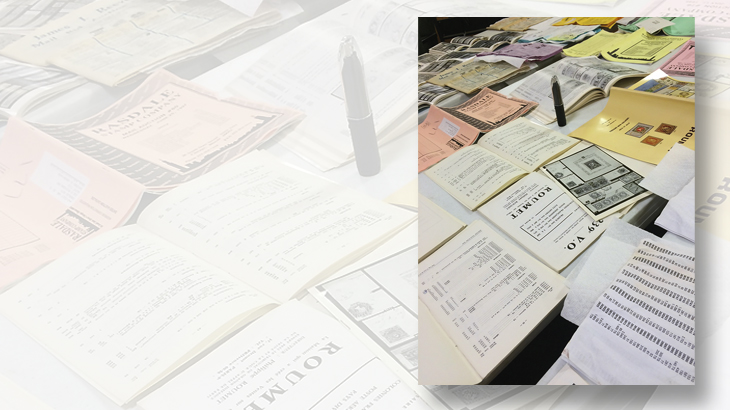 Some library materials were damaged when a roof leak occurred in mid-March at the American Philatelic Research Library.

Damage to a roof at the American Philatelic Center in Bellefonte, Pa., caused a leak in the library area that harmed some library materials. Long-term damage, however, was minimized through the quick efforts of staff members and volunteers.

The $2.6 million American Philatelic Research Library construction project caused the roof leak, which was discovered March 14 after a rainy weekend.

Water made its way into the George Turner Rare Book Room, affecting some of the rare books, but conservation efforts are underway, and all of the rare books and archival material were saved, according to information from the library.

“As long as the emergency conservation measures are effective, the monetary impact for the APRL will be small and related to treatment of rare books,” the library announced in a news release.

A number of auction catalogs damaged by the leak were rendered unsalvageable, however, and efforts are underway to replace those items through donations.

A list of the catalogs lost and information about donating replacement copies can be viewed online.

APRL Librarian Tara Murray said, “The bright side is this was a one-time incident related to construction and not an ongoing problem. Once the construction is complete, we expect the new library will be the safest home for our holdings ever.”

When the leak was discovered, library staff removed material from the affected area, positioned protective covering and initiated repairs to the roof, according to the library news release.

Murray reached out to Sue Kellerman, head of the Penn State University Libraries Preservation Department, who arrived at the site with staff members to assess the damage and provide expert advice. The Penn State group lent equipment to the APRL, including fans to circulate air and hygrometers to measure humidity.

Murray credited the quick action of the construction crew, staff and volunteers, along with the response from Penn State, to help minimize damage.

“The extent of the damage is the items listed on our APRL blog site,” American Philatelic Society Executive Director Scott English told Linn’s Stamp News. “Since putting the story out, we have received contacts from members and there have been donations of items not on our list, but filling in gaps in our library materials.”

The roof repairs are finalized and no further issues are expected, English added.

The new 19,000-square-foot library should be open for visitors by early summer and a grand opening is scheduled for Oct. 29.

An early look at the new library will be provided to World Stamp Show-NY 2016 visitors during a virtual tour at 11 a.m. on June 2.

The APRL is open to the public, and scholars are always welcome to do research on site.

Do you want access to great libraries? Search the APRL’s Philatelic Union Catalog