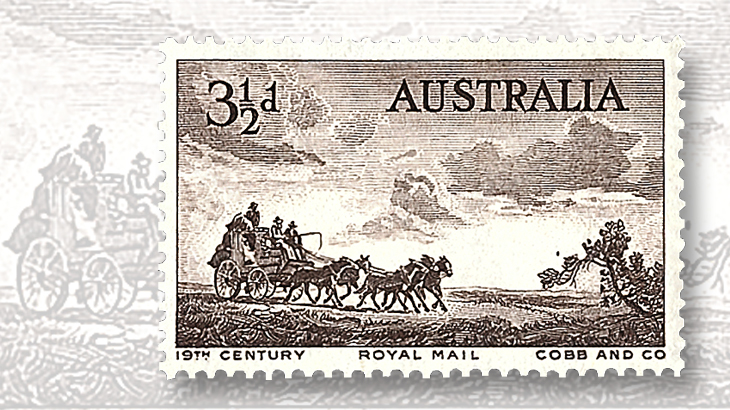 A Cobb & Co. coach, imported from New Hampshire for use in Australia, is depicted on this Australia 3½-penny stamp of 1955. 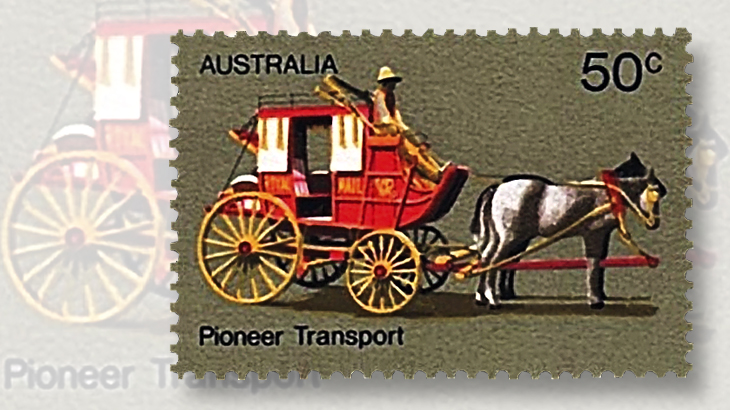 Part of an Australia stamp set issued in 1972 to show scenes of pioneer life, the 50¢ denomination pictures a Cobb & Co. coach. 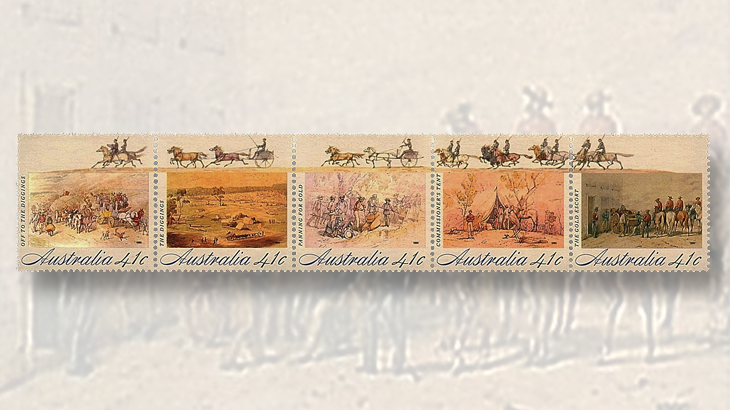 Australia’s gold rush began in 1851. Various aspects of this gold rush, including transportation, are illustrated on a strip of five se-tenant 41¢ stamps issued by Australia on May 16, 1990.
Previous
Next

In many ways, Australia and the United States share a similar history. Both nations were penal colonies for convicts who were transported by ship out of Great Britain. (The system in 18th-century North America was through indentured servitude.)

Colonists in America and Australia grew their food, built their shelters and dealt with indigenous populations. Australia and the United States are approximately the same size, minus Alaska, and have English as the primary language.

Also, both countries have experienced gold rushes that helped to promote improvements in transportation. The rush was on in the United States in 1849. Australia’s gold rush began a little later, in 1851, and both nations saw massive westward migration.

Some 300,000 “Forty-niners” headed to California after gold was found at Sutter’s Mill in 1848, and tens of thousands of Australian “diggers” traveled to their own western goldfields after the first find in New South Wales in 1851.

More gold was found throughout Australia — in Western Australia, the Northern Territory and Tasmania — but getting there was a problem. Trains had been built in Australia by 1851, but they were short lines that did not connect with one another. It took a long time to build more railroads that would get the diggers to the goldfields quickly.

Two Americans, Freeman Cobb and George Mowton, were sent to Melbourne in 1853 by the Adams Express Co., a company in business in the United States under various similar names since 1839. Cobb and Mowton were engaged to set up an international freight service. Mowton soon gave up and returned to America, but Cobb, a man only in his early twenties, studied transportation demand within Australia and determined that international freight was not the primary requirement: what Australia did need was transport to the goldfields, and Cobb began a passenger coach service in 1854.

A strip of five 41¢ stamps was issued by Australia in May 1990 (Scott 1181) telling the story of the gold rush there. The first stamp, “Off to the Diggings,” shows a crowd of diggers ready to head for the goldfields via coach, oxcart or on foot.

The second stamp, “The Diggings,” depicts a goldfield community with its makeshift housing. “Panning for Gold” on the third stamp shows diggers using the various devices for sifting gold from streams. The “Commissioner’s Tent” on the fourth stamp is where diggers would get an official license, and “The Gold Escort” on the final stamp shows the security guard who would safely accompany gold to the assayer.

Initially, two coaches ran from Melbourne to Forrest Creek (now known as Castlemain), which was one of the goldfields. The Cobb & Co. coaches carried not only passengers but also mail and parcels. Interestingly, the coaches that Freeman Cobb imported for use in Australia were “Concord coaches” built in Concord, N.H., and designed for use in the rough terrain of the American West.

The coaches were red with distinctive yellow wheels and handled Australian weather and road conditions well. A Cobb & Co. coach is shown on a 50¢ stamp (Scott 536) issued in 1972 as part of a set showing scenes of Australian pioneer life.

Freemen Cobb returned to the United States in 1856, but Cobb & Co. continued, starting a factory that built its own model of coach called “Leviathan,” a double-decker that could hold twice as many passengers or a great deal more freight.

Australia’s massive outback and enormous farms, called stations, depended on the Cobb & Co. coaches to bring their mailed letters and parcels, especially in Queensland, where in 1870 the company’s coaches were traveling 28,000 miles each week, using 6,000 horses per day.

The last horse-drawn Cobb & Co. coach service operated in Queensland until August 1924, ending its 70 years of stagecoach service in Australia. The company name was resurrected in the 1970s and a luxury tour-bus firm in Melbourne called Cobb & Co. now is owned and operated by the Dyson Group.

Australia’s first postal issues were not even postage stamps