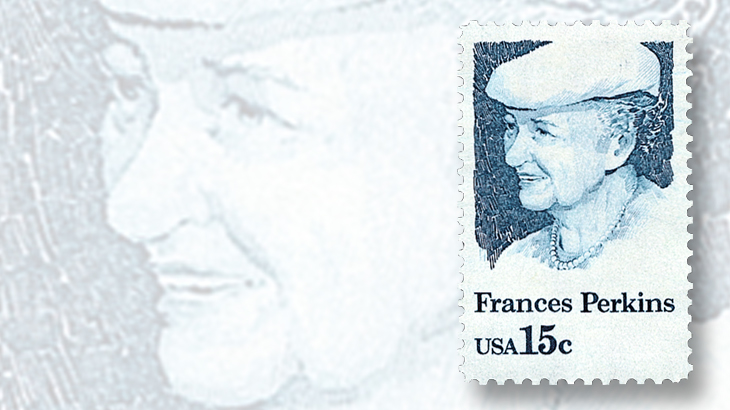 Frances Perkins, the U.S. secretary of labor under Franklin D. Roosevelt, was honored on a 15¢ stamp in 1980.

The first woman appointed to the United States Cabinet was Frances Perkins, who served as the U.S. secretary of labor from 1933 to 1945.

Perkins was born Fannie Coralie Perkins on April 10, 1880, in Boston, Mass. She studied at Mount Holyoke College and Columbia University, earning a master’s degree in sociology.

In New York, she worked as head of the Consumer’s League and commissioner of the New York State Department of Labor, appointed to the latter position in 1929 by New York Governor Franklin D. Roosevelt.

When Roosevelt became president of the United States in 1933, he named Perkins as his secretary of labor. As chairwoman of the President’s Committee on Economic Security, Perkins was instrumental in the formation of the Social Security Act of 1935.

The headquarters of the U.S. Department of Labor in Washington, D.C., constructed in 1974, was named the Frances Perkins Building six years later in her honor.