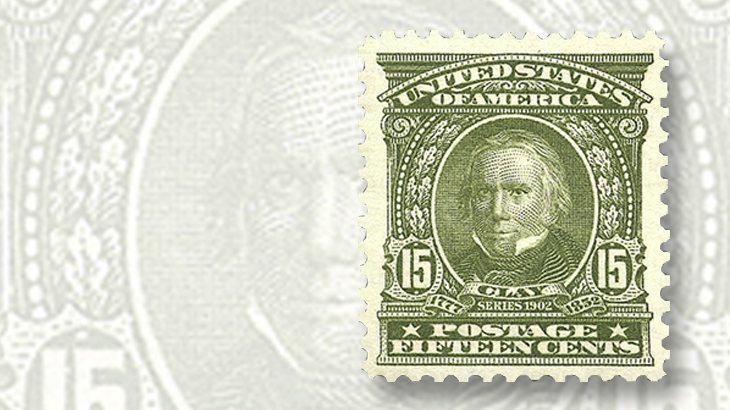 Henry Clay served his country in several offices over the course of a long political career, and has been honored on numerous stamps since the first was issued in 1870.

Clay was born in Hanover County, Va., on April 12, 1777, and was admitted to the bar in 1797 after studying in Richmond, Va. He was appointed to a seat in the Kentucky general assembly, and in 1806 was appointed to fill a vacancy in the U.S. Senate.

Clay was elected to the U.S. House of Representatives in 1811 and was immediately named Speaker of the House. He supported action against the British in the War of 1812, and helped develop and pass the 1820 Missouri Compromise.

Clay was an unsuccessful presidential candidate three times. In 1824 he was one of four candidates representing the Democratic Republic Party. Once eliminated, he supported John Quincy Adams, the eventual winner, and became the U.S. secretary of state when Adams took office.

In 1832, Clay was the candidate of the National Republican Party, losing to his longtime rival, the incumbent president, Democrat Andrew Jackson.

As a member of the Whig Party in 1844, Clay lost to Democrat James K. Polk.

Clay died in 1852 at age 75. He was often referred to as “the Great Compromiser” for forging agreements on some of the nation’s most challenging disputes.