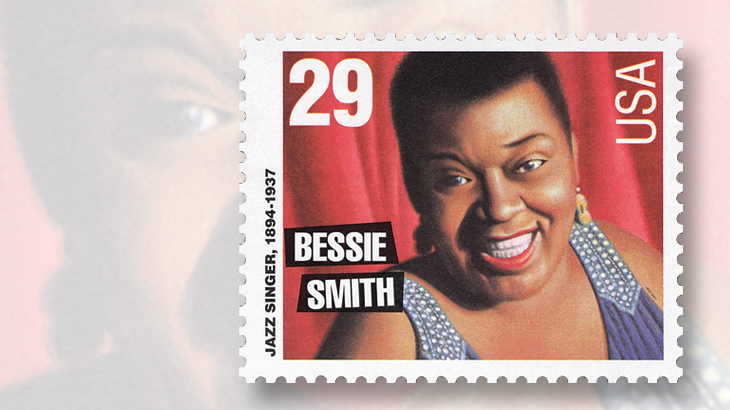 Bessie Smith, known as the Empress of the Blues, on a 29¢ commemorative stamp issued in 1994.

It is believed that legendary blues and jazz singer Bessie Smith was born April 15, 1894, although there has always been some uncertainty about her birthdate.

In 1912, she joined Moses Stokes’ black minstrel group, which also included her older brother Clarence and singer Gertrude “Ma” Rainey. Rainey, a legend in her own right, befriended Smith and was her mentor in those early years. In time, Smith would become the more famous of the two, earning the nickname “Empress of the Blues.” Her 1923 recording of Downhearted Blues by Alberta Hunter and Lovie Austin became a huge success, selling more than 800,000 copies.

The hits that followed included Gulf Coast Blues, Baby Won’t You Please Come Home, and Nobody Knows You When You’re Down and Out. Smith quickly became one of the highest paid black entertainers in the country.

Her life was tragically cut short in 1937 when she died from injuries suffered in a car accident.

Bessie Smith was honored on a 29¢ stamp issued Sept. 17, 1994, in the Jazz and Blues Singers set of the American Music commemorative series (Scott 2854). Her close friend “Ma” Rainey, who died two years after Smith, also is honored on a stamp in the same set (2859).