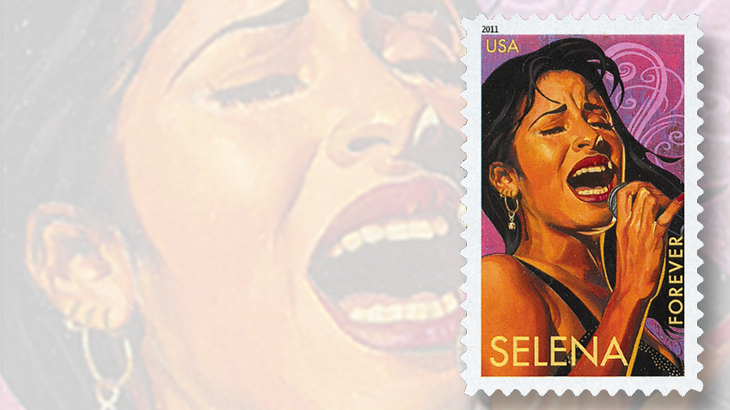 The Selena forever stamp was issued March 16, 2011, in the Latin Music Legends set.

The back of the stamp includes a printed inscription:

“Texas-born Selena Quintanilla-Perez (1971-1995) — known to fans simply as Selena — helped transform and popularize Tejano music by integrating techno-hip-hop beats and disco-influenced dance movements with a captivating stage presence. A Grammy recipient, the ‘Queen of Tejano’ broke gender barriers with record sales and awards. Even after her tragic death, Selena remains an important representative of Latino culture.”

She began her music career singing in the band Selena y Los Dinos, which included her older brother and sister. Her solo album Selena was released in 1989, and her 1993 album Live! won a Grammy Award for best Mexican-American Album. A crossover album, Dreaming of You, was released posthumously in 1995 and has sold 5 million copies.