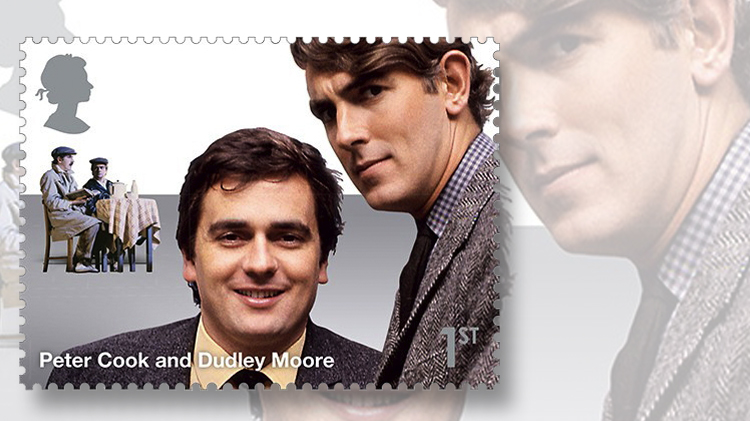 Actor and composer Dudley Moore is shown in the center of this 2015 first-class stamp from Great Britain. His longtime comedy partner Peter Cook is pictured at right.

British comic actor and musician Dudley Moore was born April 19, 1935, in London, England, where at age 11 he studied music at Guildhall School of Music and Drama, displaying a particular gift for the piano. He later continued his music studies at Magdalen College at Oxford University.

His love of jazz music led him to compose music and perform with the husband-and-wife team of bandleader John Dankworth and singer Cleo Laine.

In the early 1960s, Moore joined a new London-based comedy revue titled Beyond the Fringe which also include comedian Peter Cook. The two men would later form a partnership and star in the popular BBC television series, Not Only … But Also. They performed as a team in various formats, including films, well into the 1970s. Cook died in 1995.

Moore also continued to perform and record his music and compose soundtracks for films, but he achieved widespread fame acting in the highly successful 1979 Blake Edwards film 10, in which he starred with Bo Derek. Two years later came the blockbuster comedy Arthur, with Liza Minnelli and Sir John Gielgud.

Moore appeared in some 30 films well into the 1990s, when the brain disorder progressive supranuclear palsy brought about a serious decline in his health, resulting in his death at age 66 in 2002.

Dudley Moore and Peter Cook are featured together on a first-class stamp issued in 2015 by Great Britain’s Royal Mail (Scott 3387). Moore, who was 5 foot 2 inches tall, is shown in the center of the stamp, and Cook, who was a full foot taller, is pictured at right.