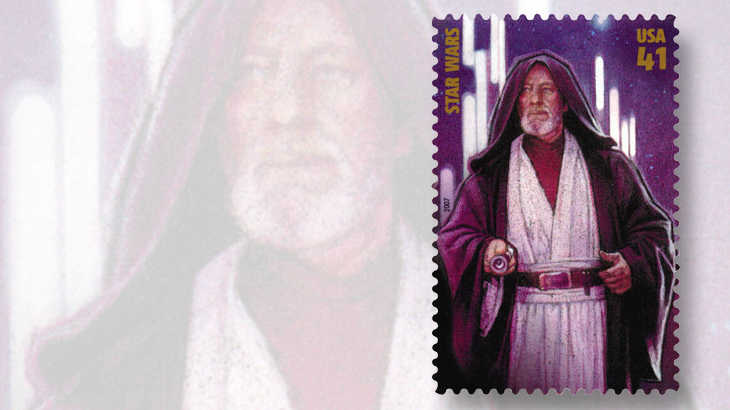 Sir Alec Guinness is depicted in his role as Jedi master Obi-Wan Kenobi on a 41¢ Star Wars stamp issued in 2007.

Academy Award-winning actor Sir Alec Guinness was born April 2, 1914, in London, England. Though he is perhaps best known to today’s filmgoers for his recurring role as Obi-Wan Kenobi in the first three Star Wars films, Guinness won his Oscar in the category of Best Actor in 1957, for his role as Col. Nicholson in the World War II epic The Bridge on the River Kwai.

As a young actor, Guinness was often cast in theatrical productions of Shakespeare and other classics, as well as in comedies. He continued to perform in Shakespeare plays regularly through much of his stage career.

He enlisted in the Royal Navy during World War II, and began working in films after the war ended. Not long after his success in The Bridge on the River Kwai in 1957, he was knighted by Queen Elizabeth II.