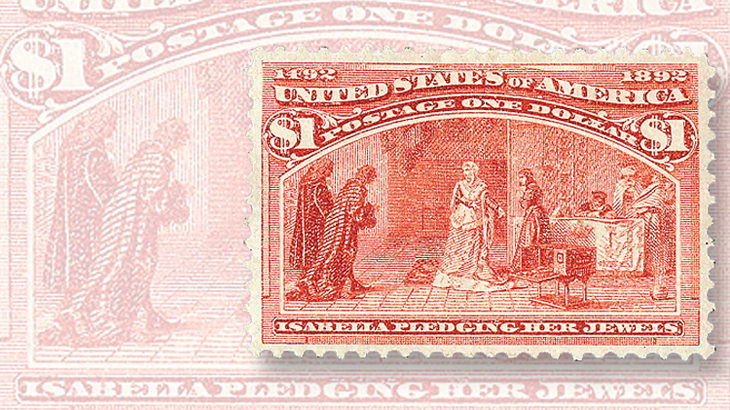 The $1 stamp in the 1893 Columbian Exposition issue shows Queen Isabella in a scene titled Isabella Pledging her Jewels.

Queen Isabella of Spain, who was born April 22, 1451, in Madrigal de las Altas Torres, is one of just a handful of foreign rulers who have appeared on United States stamps.

She is shown on some of the commemorative stamps of the 1893 Columbian Exposition issue (and the matching 1992 issue), including the $1 stamp, which is titled Queen Isabella Pledging her Jewels (Scott 241, 2624c), and the $4 stamp showing her portrait with that of Christopher Columbus (244, 2625c).

The $1 stamp design is modeled after a painting by Munoz Degrain and is based upon an event that may or may not have happened. While it is known that Isabella and her husband Ferdinand, whom she married in 1469, did eventually support the explorations of Columbus in 1492, it is uncertain that Isabella’s jewels were ever risked as collateral, though she may have provided some personal valuables to help pay for the expedition.

During the reign of Isabella and Ferdinand, Spain was united and well on its way to becoming a major international power, thanks in part to the claims Columbus made on his voyages to the New World. Political and religious reforms were also undertaken during the reign of the royal couple.