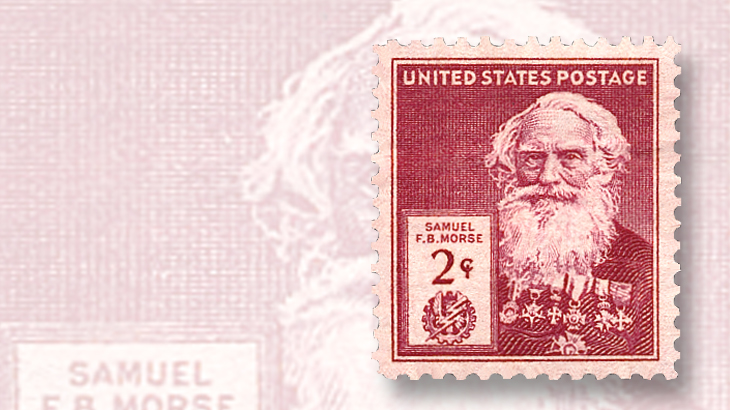 Artist and inventor Samuel F.B. Morse, on a 2¢ Famous Americans stamp issued in 1940.

Samuel Finley Breese Morse is well-known for his contributions to the development of the telegraph and the communication code that bears his name, but he was also a highly respected portrait artist and a pioneer photographer.

Morse was born 225 years ago on April 27, 1791, in Charlestown, Mass. After completing his studies at Phillips Academy in Andover, Mass., Morse attended and graduated from Yale University before leaving for England in 1811 to study painting.

A measure of his talent as an artist is his 1819 portrait of James Monroe, which today serves as the official White House portrait of the nation’s fifth president.

Morse returned to Europe in 1832 and began work on his idea for transmitting messages over long distances. He also met French photography inventor Louis Jacques Mande Daguerre and became a photographer and photography teacher after his return to the United States. One of his students was the legendary Mathew Brady.

His success with the telegraph was definitively demonstrated in 1844, when Morse, in Washington, D.C., telegraphed the message “What hath God wrought” to his assistant Albert Vail in Baltimore, Md.

As use of the telegraph quickly spread throughout the world, Morse found an international fame that is reflected in the array of medals on his chest in the 2¢ stamp commemorating him, part of the 1940 Famous American series (Scott 890). Those medals represent the recognition and honors he received from leaders throughout Europe.