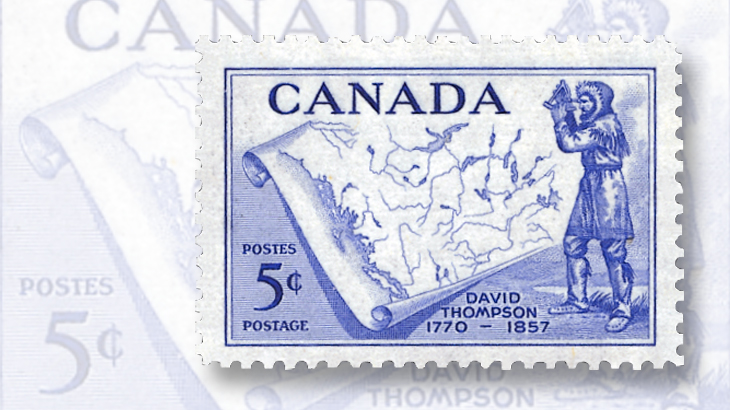 Explorer David Thompson was commemorated by Canada on a 5¢ stamp in 1957.

Explorer and cartographer David Thompson was born April 30, 1770, in London, England, and traveled to British North America at age 14 as an apprentice with Hudson’s Bay Company.

He learned surveying skills from Philip Turnor but left the company in 1797 to join the rival North West Company, where he worked as a surveyor and mapmaker.

Although he also engaged in fur trading, much of Thompson’s work involved mapping out the northern interior of the continent, including the Rocky Mountains and large areas of what today is Western Canada.

He was made a partner in the North West Company in 1806, and later traveled south through the area that is now Montana and Idaho. He explored the Columbia River, and between 1817 and 1827 he mapped sections of the border between the United States and Canada as chief surveyor for the International Boundary Survey. Because of his unparalleled travels he is remembered as an exceptional pioneer of North American exploration.