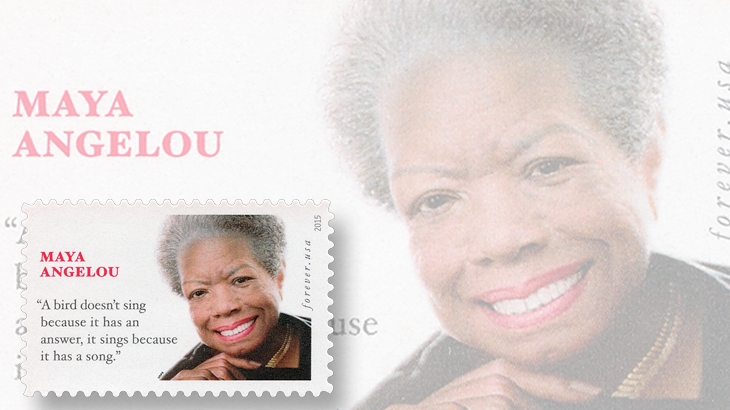 American poet and essayist Maya Angelou, on a forever stamp issued in 2015.

Maya Angelou was born Marguerite Annie Johnson in St. Louis, Mo., on April 4, 1928. A singer and dancer in the 1950s, she emerged as an author and poet in the 1960s, gaining prominence with the publication of her autobiographical I Know Why the Caged Bird Sings. She was an actress on stage, in films and on television, and is well known for her published poetry collections and essays.

Angelou was also active in the civil rights movement, including her work as a coordinator for the Southern Christian Leadership Conference.

A biographical essay printed on the back of the 12-stamp pane noted that Angelou traveled and lectured for many years, and at President Bill Clinton’s inauguration in 1993 she recited On the Pulse of Morning, a poem she wrote for the event.

“Dr. Angelou received the National Medal of Arts in 2000, and in 2011, at a ceremony in the White House, President Barack Obama awarded her the Presidential Medal of Freedom,” the essay continues. “She continued to tour, speak, write, and teach until the end of her life. Over the course of her career, Dr. Angelou was awarded more then 50 honorary degrees, released several books of essays and poetry, and had a profound influence on American culture.”