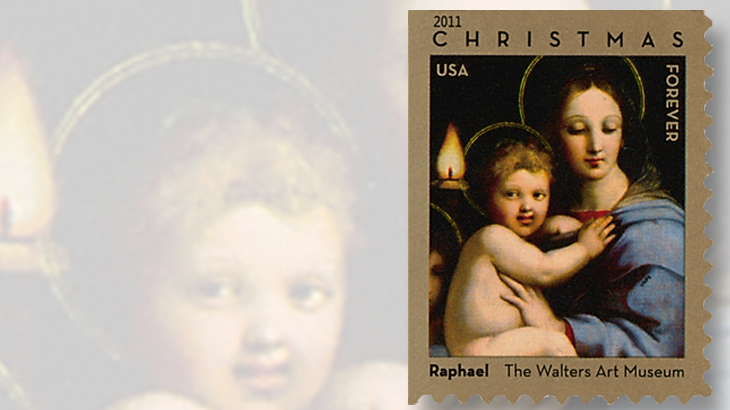 The Italian High Renaissance artist Raffaello Sanzio da Urbino, known simply as Raphael, was born April 6 (some sources say March 28), 1483, in Urbino, Italy, the son of the artist Giovanni Santi. Young Raphael began his apprenticeship as a painter as a youngster, but became an orphan at age 11 following the death of his father (his mother had died three years earlier).

Raphael continued his studies, moving to Florence in 1504, where he painted a series of Madonna portraits. Four years later, in Rome, the prolific artist was painting frescoes in the Vatican for Pope Julius II, and was later named chief architect for Pope Leo X. He began working on the altarpiece Transfiguration in 1517, but before it was completed, he fell ill with fever and died on April 6, 1520, at the still young age of 37.

Several United States stamps display Raphael’s artwork and name. Many are examples of his Madonna and Child portraits, used for the designs of traditional Christmas stamps. An early example is the Small Cowper Madonna on the 8¢ Christmas stamp for 1973 (Scott 1507).

The following year, Raphael’s portrait of Michelangelo from School of Athens was featured on the 10¢ Letters Mingle Souls stamp in the Universal Postal Union issue (Scott 1530).