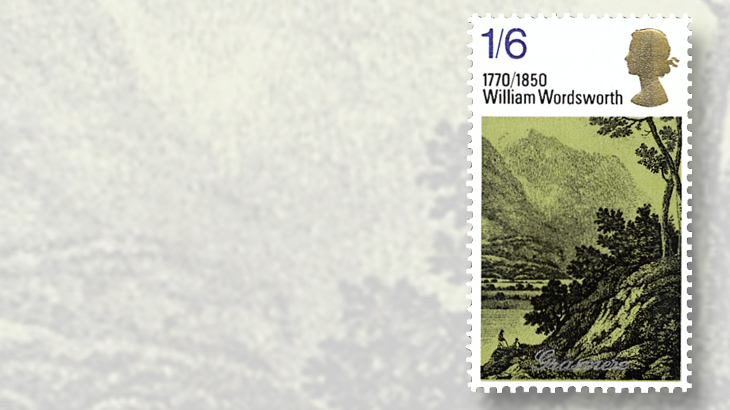 A 1970 stamp from Great Britain commemorates poet William Wordsworth on the 200th anniversary of his birth.

Renowned British romantic poet William Wordsworth was born April 7, 1770, in Cockermouth, a town in northwestern England. He had four brothers and one sister, and when the children were orphaned in 1783, William was separated from his sister Dorothy, who is known today as a poet and diarist. They reunited a decade later and remained close all of their lives.

Enchanted with nature, Wordsworth began composing poetry while at school; his earliest collection was published in 1793. He became close friends with poet Samuel Taylor Coleridge, and they collaborated on the 1798 collection Lyrical Ballads, which simplified what the two men saw as the contrived language of poetry, thus making it more accessible to readers.

Wordsworth was considered politically radical in his youth, but in his 40s he sought and obtained a government position as distributor of stamps for tax duty for the county of Westmorland. He held the position for some 30 years, granting him financial security that he would enjoy for the rest of his life.

He was named poet laureate in 1843, and died in 1850. The Prelude, an extended autobiographical poem that Wordsworth had been working on for more than half a century, was published after his death and is considered one of his finest compositions.

Wordsworth was commemorated on a 1 shilling 6 penny stamp issued by Great Britain's Royal Mail on June 3, 1970, to mark the 200th anniversary of his birth (Scott 621).