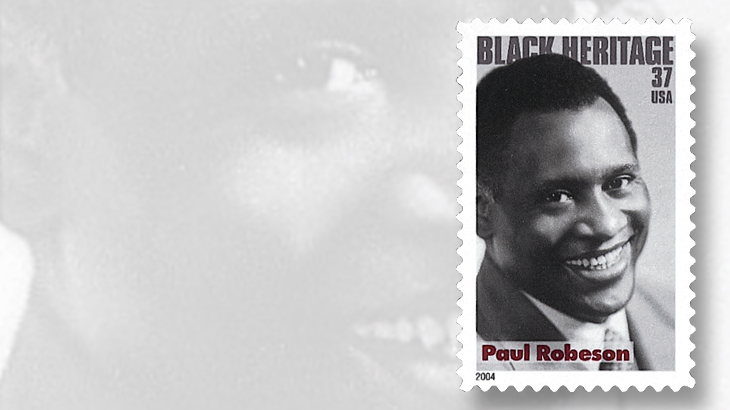 Paul Robeson was honored Jan. 20, 2004, on a 37¢ commemorative stamp in the Black Heritage series

Paul Leroy Robeson was born in Princeton, N.J., on April 9, 1898, the son of a Presbyterian minister who was born into slavery in North Carolina.

Robeson studied at Rutgers University, where he excelled in many sports and was class valedictorian upon graduation. He earned a law degree at Columbia University while also pursuing his interest in theater.

He received great acclaim for his starring performance in the 1924 New York revival of Eugene O’Neill’s play The Emperor Jones. Robeson’s career successes catapulted him into an international spotlight in theater and in films, on records and on the concert stage.

The United States National Park Service, which identifies Robeson’s New York City residence as a historic place of the Civil Rights movement, adds that “during World War II, he entertained troops at the front and sang battle songs on the radio.”

Robeson also spoke out forcefully against discrimination and the denial of civil rights that he and other black Americans experienced in the United States during the 1940s.

“He was opposed to colonialism in Africa and worked to assist and support African liberation movements,” the Postal Service reported in 2004, announcing the 37¢ Black Heritage commemorative stamp honoring him (Scott 3834).

According to the National Archives of the U.S. government, “His outspokenness about human rights and his pro-Soviet stance made Robeson a prime target of militant anticommunists. In 1950 the State Department revoked his passport, thereby denying his right to travel and, ultimately, to earn income abroad.”

Paul Robeson died in 1976 at age 77. His many honors during and after his lifetime include the NAACP Spingarn Medal in 1945, recognition by the United Nations in 1978 as one of the founders of the modern anti-apartheid movement, and a 1998 Grammy Award for lifetime achievement.