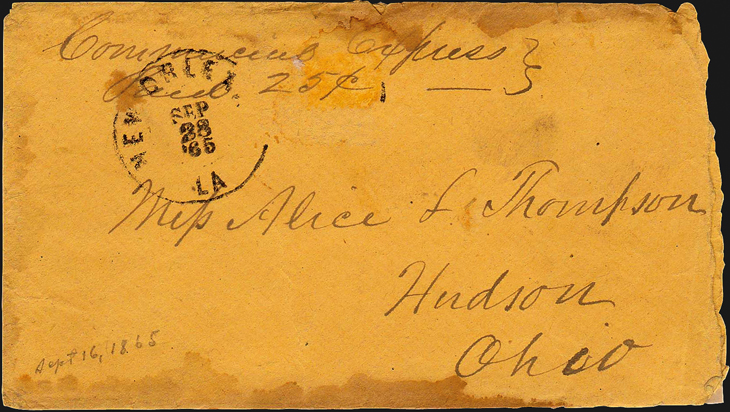 The Commercial Express Co. delivered this cover from the Texas interior to New Orleans for a fee of 25¢. It was then placed in the U.S. mail for subsequent delivery to Hudson, Ohio. A previous owner removed the 3¢ stamp from the cover to better show the E 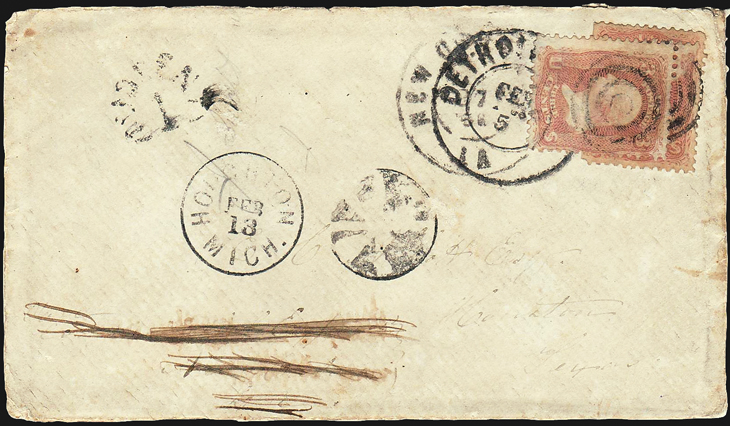 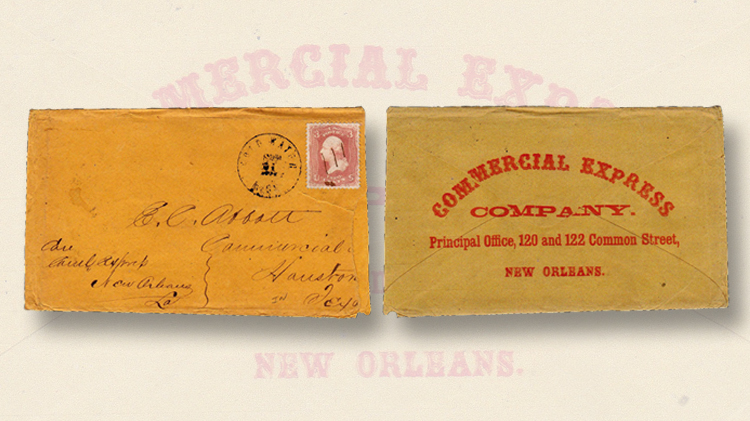 Many collectors are aware of the Pony Express, Wells Fargo Express, and the other western express companies that have been written about and romanticized since their inception.

There is another group of express firms that are much less well-known — those that operated in the South after the Civil War.

The Civil War ravaged the South. Most of the battles were fought in the South with massive destruction of infrastructure. Among the casualties of the war was the disruption of postal service in the South.

At the beginning of the war, the South instituted their own postal system, the Confederate States Postal System, and issued their own stamps, thus becoming completely independent of the United States Post Office Department.

When the war ended and the South was brought back into the Union, their postal system no longer existed and mail delivery by the Post Office Department to some areas was non-existent.

To fill this void, private express companies began to carry mail to these areas for a fee.

An example of such an express firm is the Commercial Express Company and their handling of mail into and out of Texas after the war.

The Commercial Express Company began operations in July 1864 in New Orleans and ceased operating in February 1866.

Initially they carried freight and mail to the North and Canada. In February 1865, Commercial Express began operations into Mexico. Delivery was expanded into Texas in August 1865, after the Civil War had ended.

The first Texas office was in Galveston, a port city on the southeastern coast of Texas. Mail would be carried from New Orleans to Galveston by the Commercial Express Company for a fee of 25¢ and then delivered by their agents to other parts of Texas not yet served by the U.S. Post Office Department.

Conversely, mail originating in Texas was carried to Galveston then on to New Orleans, and there put in the U.S. mail and sent on to its destination.

Shown nearby is a cover, probably from the interior of Texas, docketed in the lower left with Sept. 16, 1865 (date of origin) and carried by the Commercial Express for the fee of 25¢ to New Orleans, where it was placed in the U.S. mail on Sept. 28, 1865, and sent to Hudson, Ohio. Unfortunately, a previous owner removed the 3¢ stamp from the cover to better show the Express marking. The stamp is now lost.

Illustrated here, front and back, is a Commercial Express advertising envelope from Cold Water, Mich., postmarked Sept. 21, 1865, which probably had been provided to the sender by Abbott.

By October 1865, Commercial Express was no longer charging a fee to carry the mail to Texas. In the New Orleans Times-Picayune newspaper issue of Oct. 12, 1865, it states that Commercial Express took 4,000 letters free of charge to Texas during the previous week. The letter to E.C. Abbott was either sent free because of this new policy or because he was an employee.

The last cover shown, also sent to E.C. Abbott in Houston, Texas, was sent from Detroit Feb. 5, 1866. It was missent to Houghton, Mich., and forwarded to New Orleans Feb. 13, 1866. In New Orleans, the docketing “Care Coml Express/New Orleans/La.” in the lower-left corner of the cover was marked out.

By this time, Commercial Express had closed. A 3¢ stamp was added and canceled with a New Orleans postmark dated Feb. 17, 1866, and the cover was sent to Houston via the now open U.S. mail route.

These three covers show the way the mail was handled into and out of Texas after the Civil War by the Commercial Express Company of New Orleans. Out of the thousands of letters handled by this express company, fewer than 20 are known in collections and most of these are non-Texas uses.