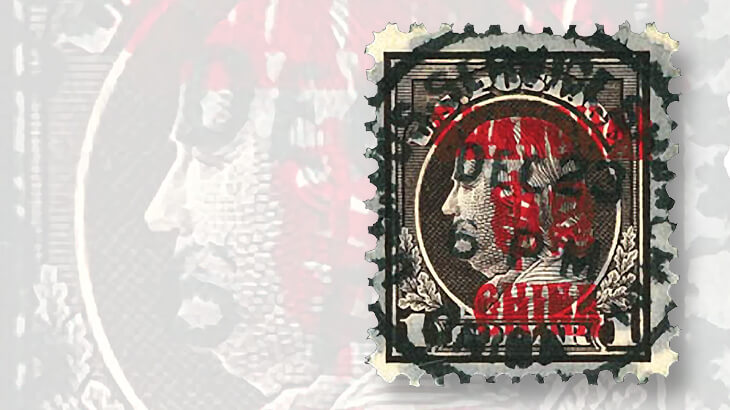 The unusual doubled surcharge on this 1919 $2-on-$1 stamp of the U.S. Postal Agency in China attracted a final selling price of $10,350 at the Schuyler Rumsey auction. 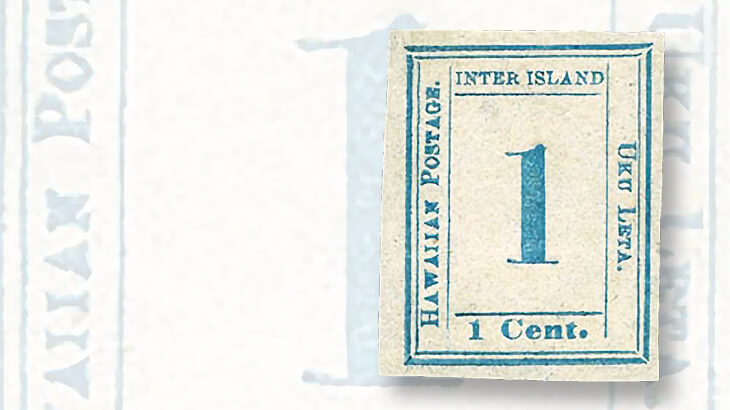 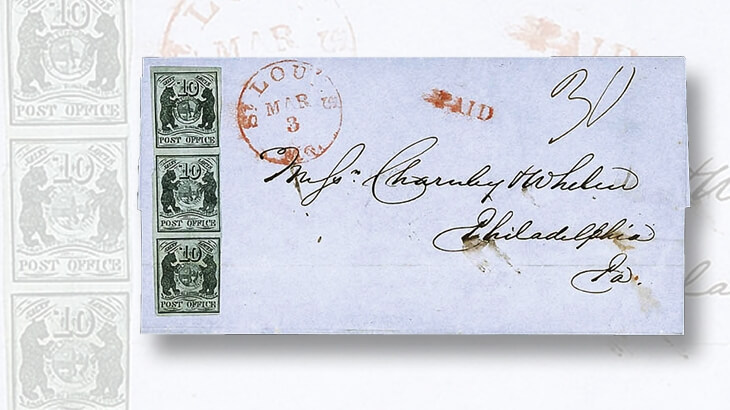 Franked with the only known strip of three of the St. Louis Bears postmaster’s provisional issue, this 1846 cover sold for $71,875 at Rumsey’s recent Gems of Philately auction. 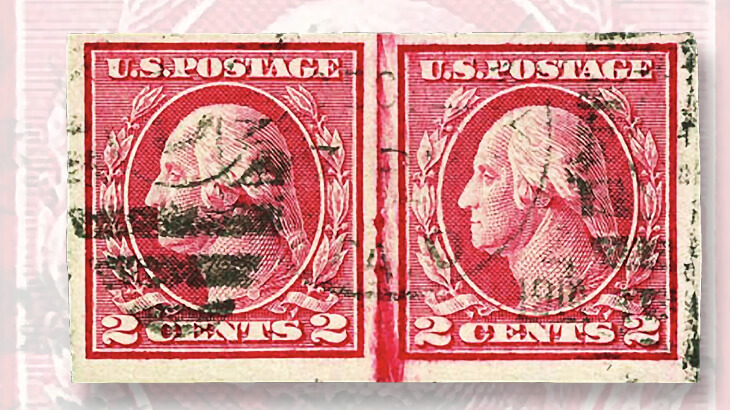 A unique used line pair of the 1914 imperforate 2¢ Washington rotary-press coil stamp sold during the Rumsey Gems auction for $48,875. 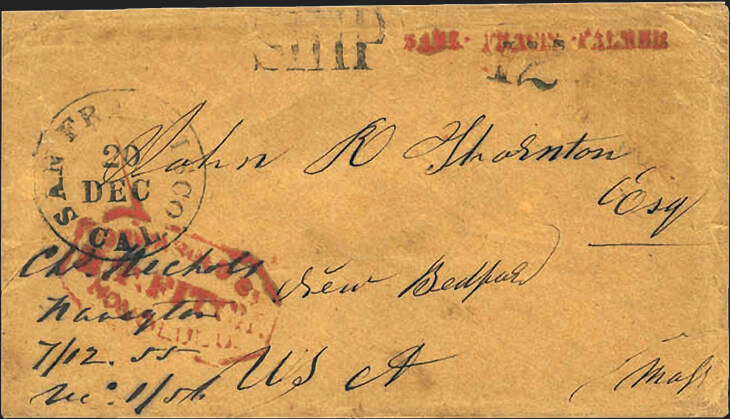 Mailed from Samoa in 1855, this stampless cover traveled through Hawaii on its way to Massachusetts. It sold for $13,225 during the March 18 Schuyler Rumsey auction of Hawaii. 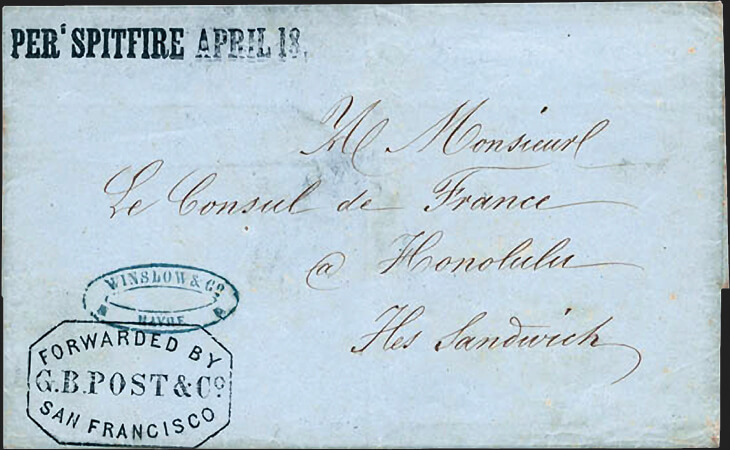 The clipper ship Spitfire, on its only trip to the Hawaiian Islands, carried this 1855 letter from France, which sold at the Schuyler Rumsey auction for $24,650. 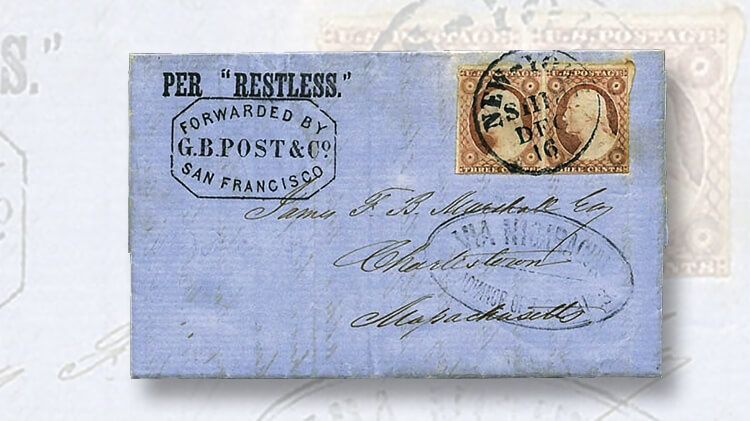 An 1854 folded letter from Honolulu to Charlestown, Mass., carried aboard the schooner Restless, sold for $27,600 in the Schuyler Rumsey auction in San Francisco. 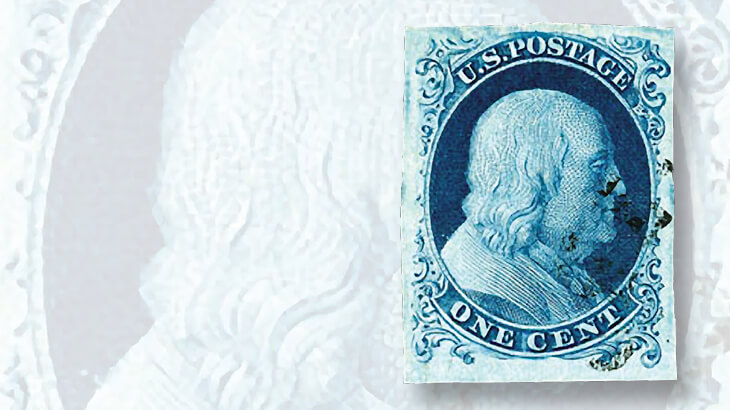 The Rumsey Gems auction also included this scarce 1851 Type 1a 1¢ blue Franklin stamp, graded superb, which sold for $60,375.
Previous
Next

Schuyler Rumsey offered the Gary Peters collection of Hawaii on March 18 and “Gems of Philately” sale March 19, both at the firm’s offices in San Francisco. The two sales were previewed in Linn’s issue of March 14.

The Peters collection was called “one of the finest collections of Hawaiian stamps and postal history to come on the market in several years.” It spanned the long history of that country, from pre-stamp postal history documenting the early years of mail to and from the islands, to various town postmarks across the islands, advertising covers, royal autographs, and lastly the stamps, beginning with the King Kamehameha III issues of 1853-61.

One remarkable stampless cover told the story of its long journey from Samoa, in the south Pacific, all the way to Massachusetts, via Hawaii, San Francisco, Panama, and New York.

The letter left Samoa, then called the Navigator Islands, on July 12, 1855, and was carried privately via Tahiti to Honolulu, arriving on Nov. 12. There, a forwarding agent named H.T. Fitch & Co. stamped the letter and transferred it in another agent’s mailbag to a barque, or three-masted sailing ship, called the Francis Palmer. That ship’s straight-line marking (barque is spelled “bark”) appears in red at the top.

The letter arrived a month later in California, where it was backstamped with an octagonal “Forwarded by G.B. Post & Co. San Francisco” and entered the United States mails. On Dec. 20, it was postmarked and put on a ship for Central America, reaching Panama on Jan. 3, 1856, and crossing the isthmus shortly after. It left Aspinwall on Jan. 15 and arrived safely on Jan. 24 in New York. The postal charge was 12¢: 10¢ for the journey from San Francisco to Massachusetts and 2¢ for the ship fee.

The cover sold for $13,225, including the 15 percent buyer’s premium added by Rumsey to all lots.

An “immaculate” 1854 blue folded letter with the same octagonal G.B. Post marking, this time going from Honolulu to Charlestown, Mass., was described as the earliest cover from that forwarder to bear a directional marking for a specific ship, in this case the schooner Restless.

This letter traveled via Nicaragua, as attested by an oval marking, and the pair of 3¢ Washington stamps (Scott 11A) was canceled on arrival in New York exactly two months after the leaving Hawaii. It went for $27,600.

A third G.B. Post-forwarded cover in the sale was an 1855 letter from France addressed to the French consul in Honolulu, “Iles Sandwich,” as Hawaii was once called. The letter was carried privately as far as San Francisco, and then placed in the mails and sent “Per Spitfire,” an American clipper ship that made precisely one sailing to Hawaii, remaining just one day before continuing to China, never to return.

Among stamps, a fresh-looking unused 1859 1¢ light blue Numeral (Scott 12) was offered in what was termed a “condition rarity,” with wide margins and completely sound. It fetched $13,800.

An extraordinary example of the imperforate U.S. 1¢ issue of 1851, with detailed characteristics of the scrollwork in the design that mark it as the scarce type 1a (Scott 6), was offered with the statement that it is “considered to be the finest used example” of this stamp. Graded Superb-98 by the Professional Stamp Experts firm, the stamp sold for $60,375.

Moving on to 20th-century rarities, the sale included a unique line pair of the 1914 imperforate, rotary-press 2¢ Washington coil stamp (Scott 459).

The Post Office Department provided the U.S. Automatic Vending Machine Company a special order of imperforate coils in June of that year. No notice was given that these were made from rotary press, rather than flat-plate printings, and so the variety went unnoticed for three years.

This pair, with very light December 1914 duplex cancels, represents the earliest-known use of the first rotary-press coil stamp. Called a “phenomenal U.S. philatelic rarity,” it sold for $48,875.