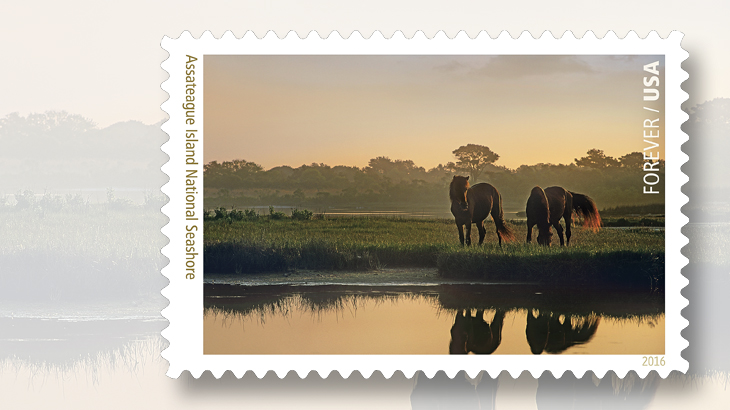 A photograph showing two of the wild horses on Assateague Island is featured on a forever stamp that will be included in the U.S. National Parks commemorative set to be issued June 2.

A pair of wild horses is featured on the third National Parks stamp design revealed this week by the United States Postal Service. The forever stamp celebrates Assateague Island National Seashore, which extends over much of Assateague Island in Maryland and Virginia.

The island is famous for its wild horses, which form two herds on the Maryland and Virginia sides of the island, separated by a fence.

“The herds have divided themselves into bands of two to twelve animals, and each band occupies a home range,” according to the National Park Service, which manages the Maryland herd.

“The Chincoteague Volunteer Fire Company owns and manages the Virginia herd, which is allowed to graze on Chincoteague National Wildlife Refuge, through a special use permit issued by the U.S. Fish and Wildlife Service. The permit restricts the size of the herd to approximately 150 adult animals in order to protect the other natural resources of the wildlife refuge.”

Visitors to Assateague Island are encouraged to observe the horses from a distance in their natural habitat.

The horizontal stamp design uses a photograph by Tim Fitzharris of Fayetteville, Ark.

The Postal Service is revealing one of the 16 stamp designs in the National Parks set each day over the course of three weeks. The stamp set, commemorating the 100th anniversary of the National Park Service, will be issued June 2 in New York City during World Stamp Show-NY 2016 at the Javits Center.