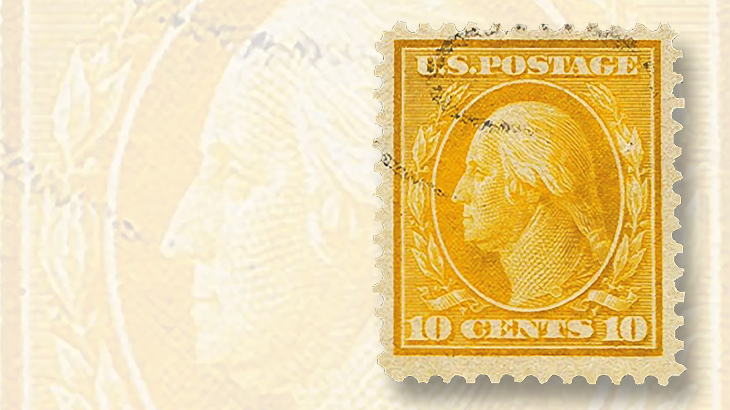 This used example of the United States 1909 10¢ yellow George Washington on bluish paper will be offered during the May 5-7 H.R. Harmer auction in Costa Mesa, Calif.

The May 5-7 H.R. Harmer public auction is taking place at the Costa Mesa Hilton, 3050 Bristol St., in Costa Mesa, Calif.

The sale begins on Thursday morning with some 100 or so lots of U.S. proofs and essays in singles and sets, including a complete set of large die proofs of the 1869 Pictorial issue, bound in a gold embossed National Bank Note Co. presentation book.

A key item among the U.S. stamp issues on offer is a lightly canceled used example of the 1909 10¢ yellow George Washington stamp on bluish paper (Scott 364).

The Scott Specialized Catalogue of United States Stamps and Covers explains that the grayish blue appearance of the paper is the result of it being manufactured from 35 percent rag stock rather than all wood pulp.

These bluish paper stamps generally catalog with values that are significantly greater for used examples than for unused, and the 10¢ yellow is no exception. For that reason, proper authentication of a used stamp is a must, and this example is accompanied by two such certificates from the Philatelic Foundation issued 40 years apart (1976 and 2016).

H.R. Harmer describes the handsome stamp as exceptionally well centered, and it is lightly struck with a mute double oval cancel. The stamp is offered with an estimate of $7,500 to $10,000.

The 15¢ stamp has a thin spot described as tiny on the 2016 certificate from the Philatelic Foundation expert committee, and is struck with a double oval postmark.

One cover is addressed to Winchester, Va., the other mailed to Annapolis, Md.

A considerable selection of Hawaiian postal history is offered, mostly on Hawaiian postal stationery and including a number of registered mail covers, and Wells Fargo franks on unused and used envelopes.

Hawaii stamps and postal stationery, town cancels, and more are on offer as well.

Additional information about the H.R. Harmer auction can be found online. The website provides opportunities to view the auction lots and place bids.