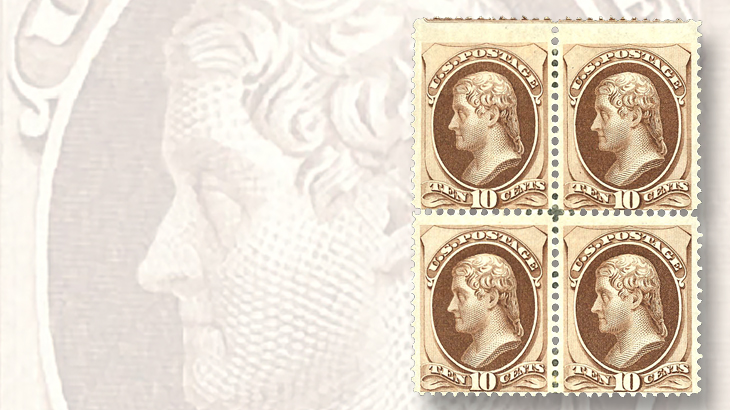 A recently discovered block of four of the 1870 10¢ brown Thomas Jefferson H-grill stamps with full original gum will be offered during the Daniel F. Kelleher Flagship auction taking place April 19-21 in Danbury, Conn.

A nice treat found in the Canada material is a tete-beche gutter pair from Prince Edward Island, the 3-penny blue Queen Victoria from the 1862-65 issue (Scott 6). The stamps have large margins and are separated by a gutter with a vertical crease, as seen on all such pairs. Kelleher notes that only six such pairs can exist, and offers this example with an estimate of $3,000 to $4,000, and an opening bid of $1,500.

Tucked among these is an unused block of four with original gum of the 1870 National Bank Note Co. 10¢ brown Thomas Jefferson stamp with H grill (Scott 139).

Kelleher identifies the block as ex-Hind and ex-Grunin, rediscovered by John Stoltz of McCloud Stamps and Covers in Rochester, N.Y., after an absence from the market since 1979.

A partial imprint is showing along the extra large top margin, according to the Kelleher auction catalog description, which states that “only two or three blocks” are reported.