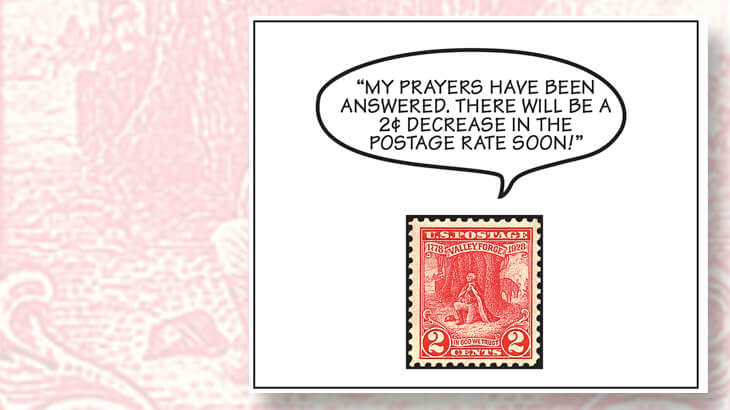 A prayer that few would have believed could ever come true is the subject of our winning philatelic line for this 2¢ 1928 Washington Praying at Valley Forge stamp, our Cartoon Caption Contest stamp for March. The caption is the work of Steve Kotler from S

With the current preponderance of election news every time the TV is turned on, it is not surprising that a great many entries in our March contest dealt with that subject. The stamp of the month was the 1928 2¢ red issue showing Gen. George Washington praying at Valley Forge.

Quite a number of the entries were partisan, taking the opportunity to vent their spleen regarding one or another of the candidates.

As seems to be the case in real life, today’s Republican front-runner got a lot of attention from our entrants. Two caused me to fall off my chair:

“I hope the British capture Gen. Trump!” from Robert Greenwald of Melville, N.Y., and “Dear Lord. If I am elected president, I will build a wall around the 13 colonies and make the Indians pay for it!” by Nancy Foutz from Stone Ridge, N.Y.

Another major theme was the fact that the stamp design is in red, causing something of a problem for Gen. Washington. Richard Hall from Asheville, N.C., highlighted this with:

Shown nearby is our philatelic winner, which plays off the U.S. Postal Service’s loss in the courts and the resulting imposition of a 47¢ first-class rate, down from 49¢, going into effect this month. It is from Steve Kotler of San Francisco, Calif.

On the non-philatelic side, our winner is from J.M. Kelly of Tucson, Ariz., who has Washington praying, “Dear God, Please expedite the delivery of my mail-order wooden teeth!”

“ … and last but not least, a packet of really peelable hinges. Amen,” by Michael Morrissey of Westerville, Ohio.

“I’m so happy to be kneeling in the forest rather than standing up in that boat!” by Laura and Tom Tomaszek from Cedar Rapids, Iowa.

“Please, God, help Ben pick a good portrait of me for the first stamp,” from Mike Samra of Murrells Inlet, S.C.

Thanks and a tip of the hat to all who entered. The next cartoon caption contest will be announced in the May 9 issue of Linn’s.