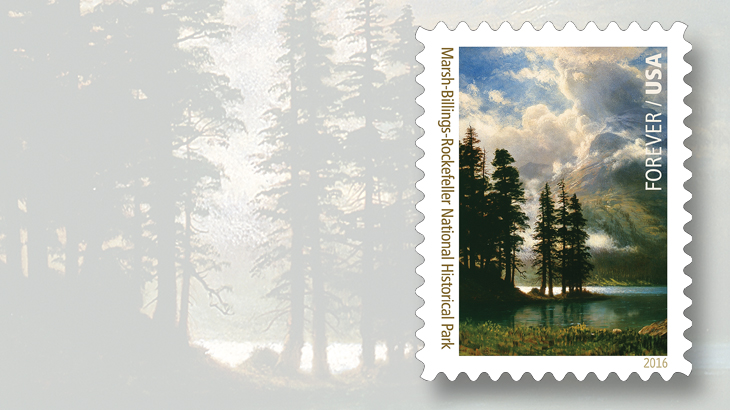 Detail of a painting by artist Albert Bierstadt is featured on a stamp commemorating Marsh-Billings-Rockefeller National Historical Park in Vermont. The stamp will be issued in the National Parks set June 2.

A stamp representing Marsh-Billings-Rockefeller National Historical Park in Vermont will show a detail of an Albert Bierstadt landscape painting that is “linked to the Conservation Movement that supported interest in creating the National Park System,” according to the United States Postal Service.

The nondenominated forever stamp will be issued June 2 in a set of 16 stamps commemorating the 100th anniversary of the National Park Service. The stamp design is the 12th to be revealed by the Postal Service day-by-day since April 4.

“This stamp exemplifies how our national park treasures extend beyond stunning vistas, wildlife, flora and fauna,” said Stephanie Toothman, associate director, Cultural Resources, Partnerships, and Science, National Park Service. “Albert Bierstadt’s painting represents the convergence of artistic, literary and political attention toward America’s scenic beauty in the 19th century, which helped establish conservation as a national value and laid the foundation for the first national parks a century ago.”

The stamp shows a detail of Bierstadt’s painting, known today as Scenery in the Grand Tetons. It was acquired by Laurance Rockefeller in the 1960s and now hangs in the study in the Marsh-Billings Rockefeller Mansion.

The park includes the mansion, surrounding property and a 550-acre forest. It was created in 1992 as a gift to the American people from Laurence Rockefeller (1910-2004) and his wife Mary Rockefeller (1910-1997), according to the National Park Service. It is named for the Rockefellers, and for two earlier owners: author and conservationist George Perkins Marsh (1801-82), and railroad entrepreneur Frederick Billings (1823-90), who purchased the property from Marsh and maintained his tradition of conservation.

The set of 16 will be issued June 2 with a ceremony during World Stamp Show-NY 2016 at the Javits Center in New York City.