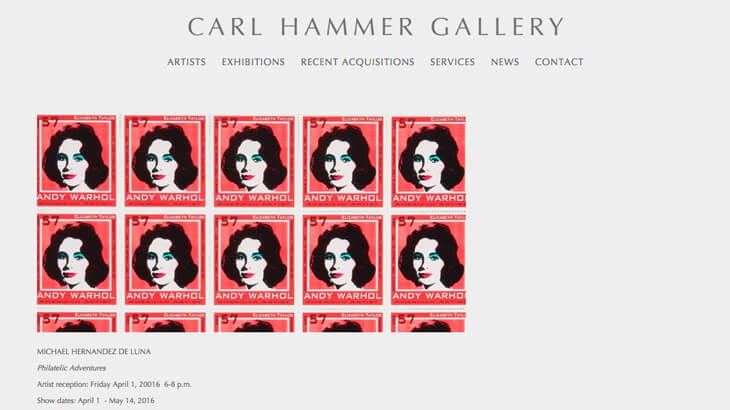 An exhibition of fake stamps created by artist Michael Hernandez de Luna is on display at the Carl Hammer Gallery in Chicago. (Screenshot of www.carlhammergallery.com)

Satire and stamps aren’t exactly two peas in a pod. However, an artist from Chicago has found ways to blend the two that get people’s attention.

A recent feature from the Chicago Reader profiles Michael Hernandez de Luna, an artist who has been creating his own fraudulent stamps for over 20 years.

A satirist by trade, Hernandez de Luna’s style is meant to stir controversy and almost mock stamps and the United States Postal Service. His work is currently on display at the Carl Hammer Gallery in the Old Town neighborhood of Chicago.

“Hernandez de Luna’s unwitting collaborators, the USPS employees who are in charge of cancelling stamps, could be viewed as the butt of the joke,” the Reader’s Dmitry Samarov writes. “Yet they are agents, however inept, of the public, so everyone is in some way implicated – we’re all getting fooled. By involving a colossal bureaucracy like the USPS, Hernandez de Luna deepens his critique of the institutions that govern society.”

Hernandez de Luna certainly stirs the pot of controversy, and seems to enjoy it.

With over 2,300 lots for sale, the April 19-21 Daniel F. Kelleher sale covers a variety of stamp categories for buyers to choose from.

Aside from U.S. classics, what else can buyers choose from?

Denise McCarty writes about the 10 stamps issued by Great Britain’s Royal Mail honoring the 400th anniversary of the birth of the iconic William Shakespeare.

“Considered by many to be the world’s greatest writer and dramatist,” McCarty writes, “and regarded as England’s national poet and playwright, Shakespeare was born in April 1564 in Stratford-upon-Avon. He died April 23, 1616.”

Each stamp honors the work of Shakespeare in a different way. Have a look.