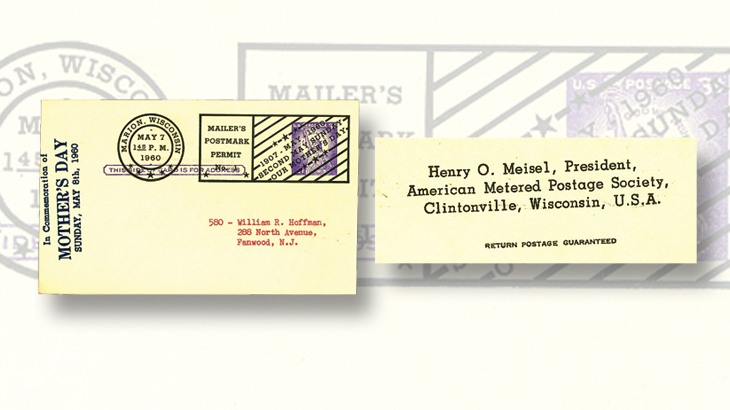 A simple recollection of Mother’s Day 1960 is this postal card with a Mailer’s Postmark Permit cancel. The printing from the reverse of the card also is shown. 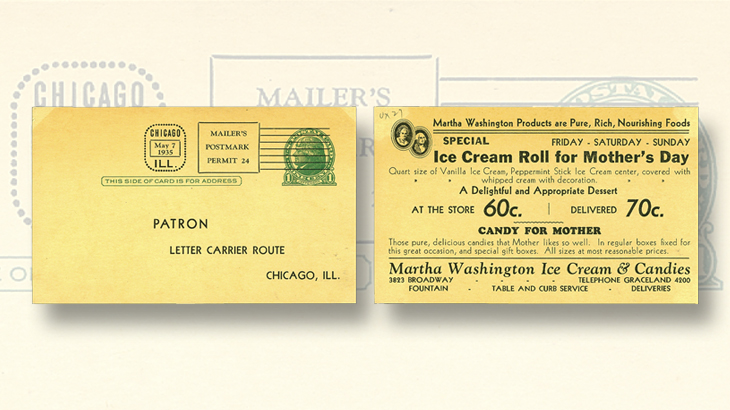 Although unimposing from the front, this 1935 1¢ Thomas Jefferson postal card has on the back an “Ice Cream Roll for Mother’s Day” special offer from Martha Washington Ice Cream & Candies to brighten the celebration.
Previous
Next

About a year ago, I pictured a Father’s Day advertising card in the U.S. Stamp Notes column (Linn’s, July 6, 2015). This was the only example I had ever seen for this celebration.

I challenged readers to come up with a cover that noted Mother’s Day, something other than the standard first-day cover of the 1934 3¢ Mothers of America issue showing an adaptation of the painting nicknamed Whistler’s Mother.

I expected to receive dozens of reports. Instead only one reader, Scott Shaulis of Murrysville, Pa., came up with any examples, and he supplied two.

One is the 3¢ Statue of Liberty postal card with a May 7, 1960, mailer’s postmark permit cancel shown nearby.

The second example for Mother’s Day is a 1¢ Thomas Jefferson postal card with a May 7, 1935, Chicago mailer’s postmark permit. The back of the card is an ad from Martha Washington Ice Cream & Candies, suggesting an “Ice Cream Roll for Mother’s Day.”

If you bought the ice cream roll at the store it was 60¢; it cost 70¢ if you had it delivered.

This was a significant amount of money in 1935, but what a surprise for mom.