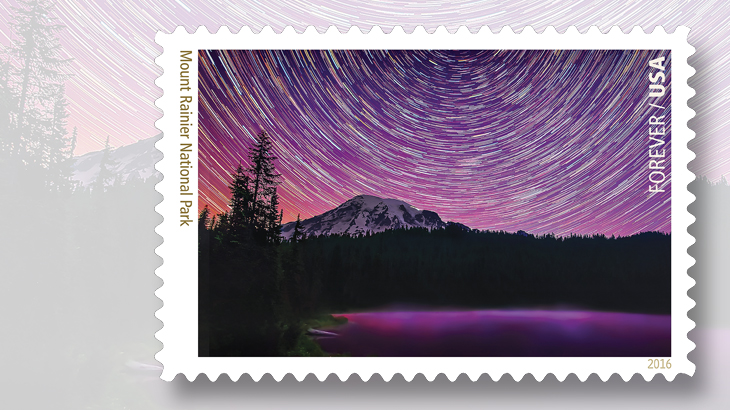 Mount Rainier National Park is featured on this forever stamp to be issued June 2.

A forever stamp commemorating Mount Rainier National Park in the state of Washington will show what the United States Postal Service is describing as a “star trail photo merged from 200 images” by photographer Matt Dieterich of Pittsburgh, Pa.

The design is the 13th in the upcoming National Parks set revealed by the Postal Service since April 4. The set, marking 100 years of the National Park Service, will be issued June 2 during World Stamp Show-NY 2016 at the Javits Center in New York City

According to the Postal Service, dedication ceremonies will also take place at or near each of the parks depicted on the stamps.

On his website, Dieterich provides a date for the photo of June 22, 2015, and describes it as showing “star trails and pink aurora over Mount Rainier.”