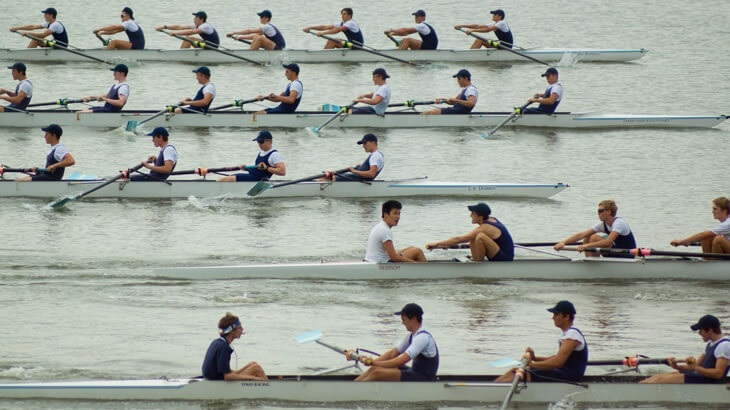 Much like former Olympian and stamp collector John Everett did for the U.S. team in the 1976 and 1980 Olympics, teams of young men race their row boats in Sydney, Australia. Everett will be on hand and speaking at World Stamp Show-NY 2016. (Getty image)

The buzz around World Stamp Show-NY 2016 is building, and the Sports Philatelists International booth is expected to be a busy one, with numerous Olympic and sport-based activities.

Among those activities is a scavenger hunt for kids that lists 20 items, and includes a prize for winners.

Also, former U.S. Olympian John Everett, who competed for the U.S. Rowing Team in 1976 and 1980, will be on hand. Everett’s presentation, “Pulling Your Weight – A Philatelic Story of Rowing and the Olympics,” will happen at noon Eastern Time on Monday, May 30.

Nancy Clark, the former president of Olymphilex 1996, will be speaking before Everett, giving a presentation called “Not Just Stamps – a Philatelic Story of the 1996 Atlanta Olympic Games.”

A stamp depicting the Marsh-Billings-Rockefeller National Historic Park in Vermont is coming on June 2 from the United States Postal Service.

Michael Baadke goes into further details about the stamp, which is part of the 16-stamp salute to the 100th anniversary of the National Park Service.