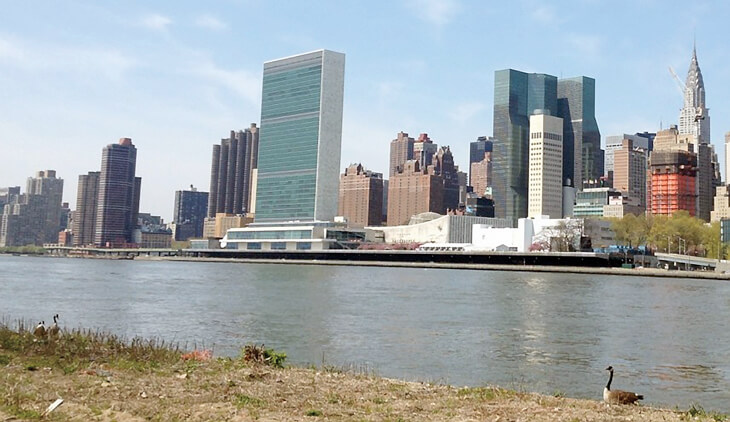 United Nations Headquarters at midtown east in New York City is both a tourist and a philatelic destination. The United Nations Postal Administration has a sales counter in the basement with new issues of its New York, Geneva and Vienna post offices. 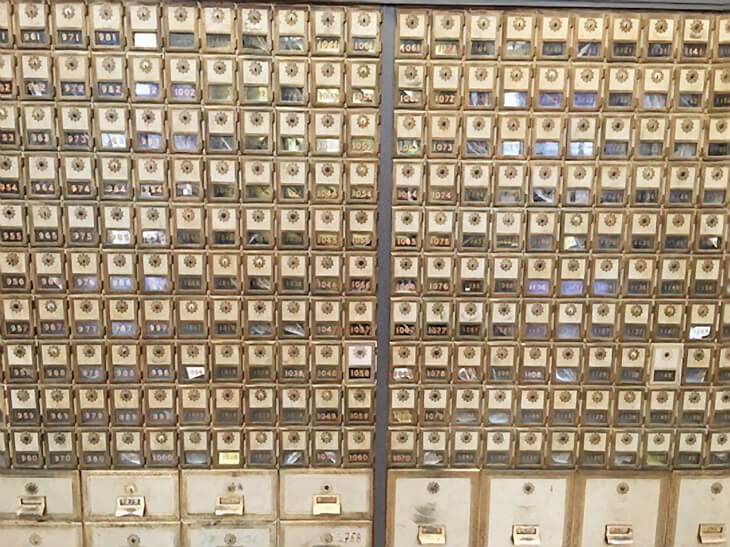 Hundreds of rental post office boxes that have long served the huge city population fill walls at the Farley building. 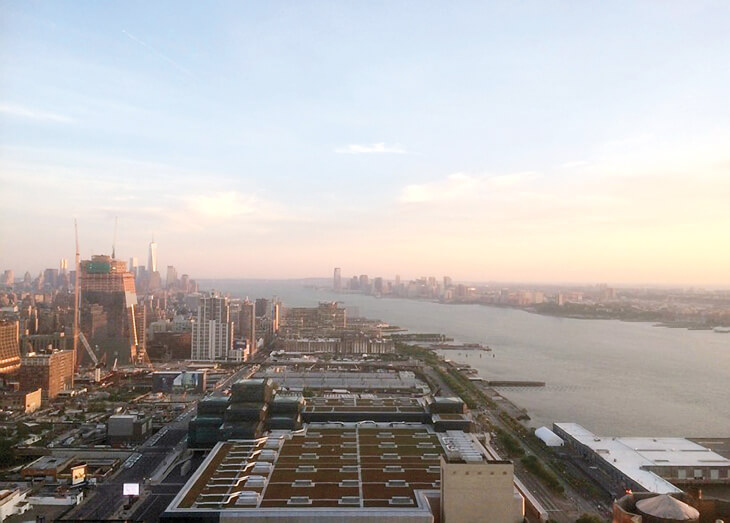 World Stamp Show-NY 2016 will take place at the Javits Center (in the foreground with a green roof), but New York City has more for stamp collectors to explore. 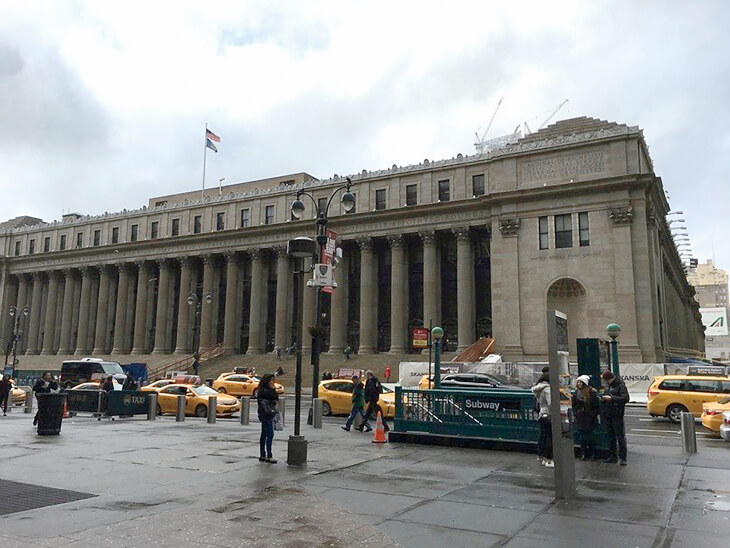 The historic James A. Farley Post Office Building, across the street from Penn Station and with full postal services, is just a short walk from the Javits Center. 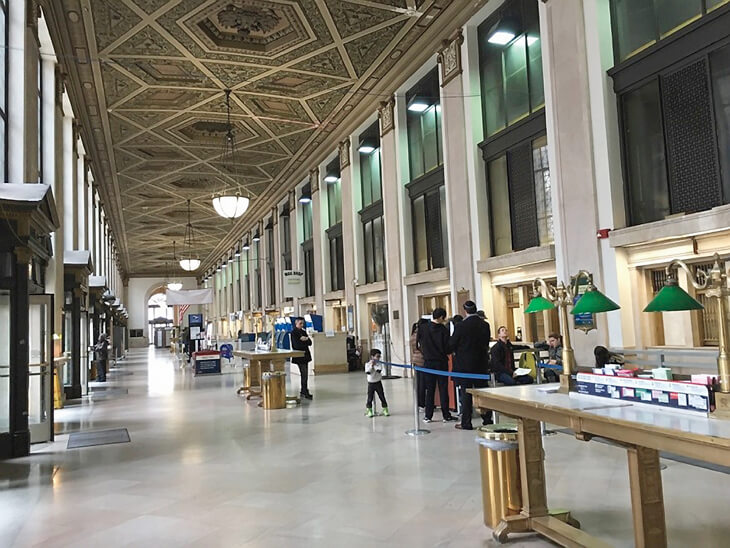 Inside the Farley Post Office Building are postal sales counters and a postal store, along with antique (but still in use) post office boxes. 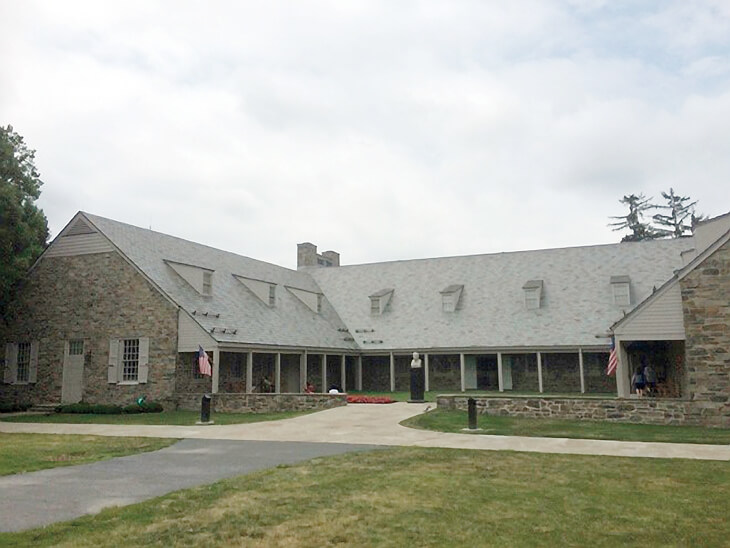 The Franklin D. Roosevelt Presidential Library and Museum and the Roosevelt Home are in Hyde Park, N.Y., a scenic two-hour trip from Manhattan. 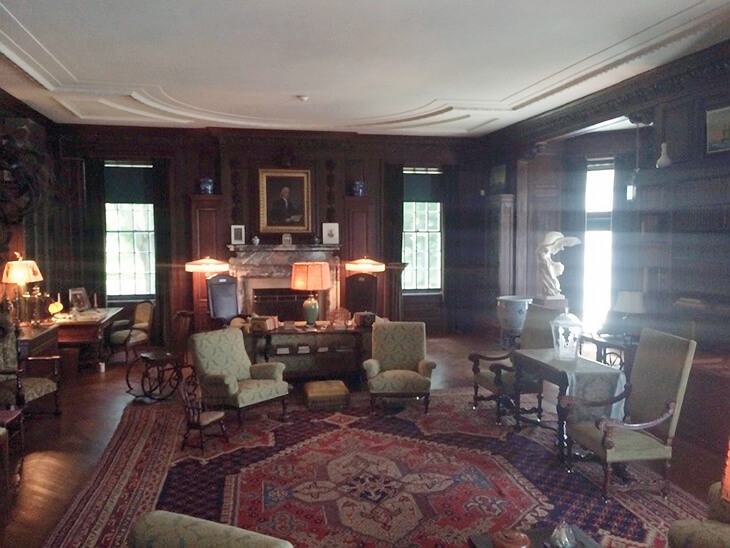 The stamp-collecting president’s living room at Hyde Park, one of the places where he probably enjoyed working on his stamps.
Previous
Next

In 2015, a series of articles titled “Stamp Quest for Travelers” was published in Linn’s Stamp News. I personally have traveled to those countries and visited all those stamp destinations. It was a very rewarding experience, but there is truth in the old saying: There is no place like home!

With World Stamp Show-NY 2016 taking place at the Jacob K. Javits Convention Center in New York from May 28 to June 4, now is the moment to write about stamp quests in my hometown, and to share some of my personal go-to philatelic places around the Big Apple.

WSS-NY 2016 is the philatelic event not only of the year but of the decade in the United States, because there is an international show in this country only once every 10 years. Regardless of your hobby experience, collecting interests or budget, there certainly will be something for every visitor at this colossal event.

If you come to New York City for the show, you might also want to go beyond the convention center and check out a few local philatelic destinations.

One likely site is the main United States Postal Service building in New York City, officially known as the James A. Farley Post Office Building. The building was renamed in 1982 to honor the career of the postmaster general who served under Franklin D.  Roosevelt.

The neoclassical structure, built in 1912 and on the National Register of Historic Places, covers eight acres on Eighth Avenue between 31st and 33rd streets. It is hard to miss if you are coming by train because the grand facade and stair platform are across the street from Penn Station on Eighth Avenue.

One famed aspect of this building is the inscription carved on its pediment, from the Greek historian Herodotus: “Neither snow nor rain nor heat nor gloom of night stays these couriers from the swift completion of their appointed rounds.”

Going up the grand entry staircases on Eighth Avenue, you arrive at the lobby hall of the post office. The retail shop is on the right (northern) end of the hall, with postal souvenirs, philatelic items and mailing supplies for sale. At the postal sales windows, you can purchase newly issued stamps, apply for a passport, purchase money orders, and receive other services.

In the grand hall are multitudes of post office boxes that are available for rent. I especially like the walls filled with a splendid array of bronze-colored and decorative historic post office boxes.

The second must-see philatelic destination is the post office at the United Nations headquarters. It is located on the east side of town: take the M42 crosstown bus and get off at First Avenue. The visitors’ entrance is located at 45th Street and First Avenue. After passing through security, visitors can follow the circulation path to take a tour of the United Nations or go downstairs to the basement level, where the gift shops and the post office are located.

The United Nations Postal Administration (UNPA) is a postal agency that legally issues postage stamps and postal stationery in U.S. dollars for the U.N. headquarters in New York, in Swiss francs for the Geneva office and in euros for the Vienna office.

The New York U.N. headquarters post office has a philatelic sales area that was recently renovated, and its spaciousness and open display shelves make a great shopping experience. A fun souvenir of your visit there would be to mail to yourself or to others a letter or postcard, using stamps issued by the U.N.–N.Y. headquarters. Recent issues of postage stamps by all three U.N. offices can be purchased in U.S. dollars (converted equivalences).

In addition, near the tour admissions in the main U.N. building lobby, visitors can purchase a personalized stamp sheet printed with their picture taken at the booth there.

If you have energy and time available for further exploring, you might visit the Champion Stamp Co., an independently owned business located on 54th Street between 9th and 10th avenues in midtown west. The stamp store is about a 25-minute walk from the Javits Center (check the store hours before you go).

If time permits you to explore farther afield of the city, I would recommend taking a scenic trip up the Hudson River by car or train, and pay homage to the most famous American philatelist: President Franklin D. Roosevelt. A two-hour drive from Manhattan will bring you to the Presidential Library and Museum and the home of FDR in Hyde Park, N.Y.

The Roosevelt estate, Springwood, was the president’s birthplace, lifelong home, and where both he and his wife, Eleanor, are buried. It is a National Historic Site, administered by the National Park Service since 1946.

Images of the president and his stamp-collecting hobby have appeared on numerous worldwide stamps, and many, if not most, collectors probably are aware of FDR and his eclectic stamp interests. Visitors can tour the home (advance reservations highly recommended) and see the actual room where President Roosevelt worked on his stamp collections and also approved some new U.S. issues.

The U.S. Postal Service and the United Nations Postal Administration will be well-represented with large booths at WSS-NY 2016, with large stocks of recent stamp issues and a wide variety of other philatelic items. And, even if you miss the international show this year, the other sites mentioned here will be available anytime you are able to visit New York City!