A look back at political polling in the 19th century: U.S. Stamp Notes 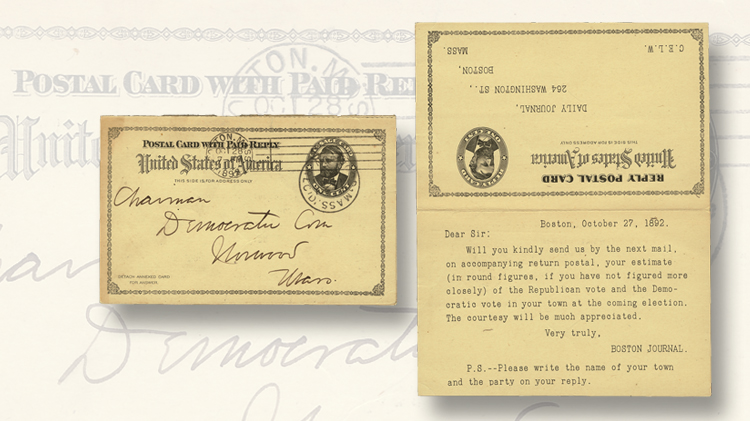 Political polling has come a long way from this 1892 effort, using a 1¢ paid postal reply card to gauge the direction of public opinion. The card was sent from the Boston Journal to the chairman of the Democratic Committee in Norwood, Mass. The chairman apparently never replied.

Political polling is ubiquitous these days.

Who is leading the pack among challengers in the presidential race and who is catching up to them? What issues are tops on the minds of voters?

These questions and more are subjected to polls by phone, by mail, by Internet and in focus groups. Conducting these polls is big business, hundreds of millions of dollars per year at a minimum.

Although there is the ability to manage polls to try to achieve valid results (who is surveyed, the form of questions), pollsters seem to be off target as much as on.

Polling methods certainly have changed over the years, and I recently found an example showing one of the old ways.

The message reads: “Dear Sir: Will you kindly send us by the next mail, on accompanying return postal, your estimate (in round figures, if you have not figured more closely) of the Republican vote and the Democratic vote in your town at the coming election. The courtesy will be much appreciated, Very truly, BOSTON JOURNAL.”

The postscript message asks, “Please write the name of your town and the party on your reply.”

The card was postmarked Oct. 28 in Boston.

The committee apparently never responded because the reply part of the card is still attached.

This was sweet revenge for Cleveland because he had been defeated in the prior election by Harrison.

I wonder what the polling said? Certainly, the failure of the addressee to respond to the Boston Journal’s query illustrates the tenuous nature of polling results.