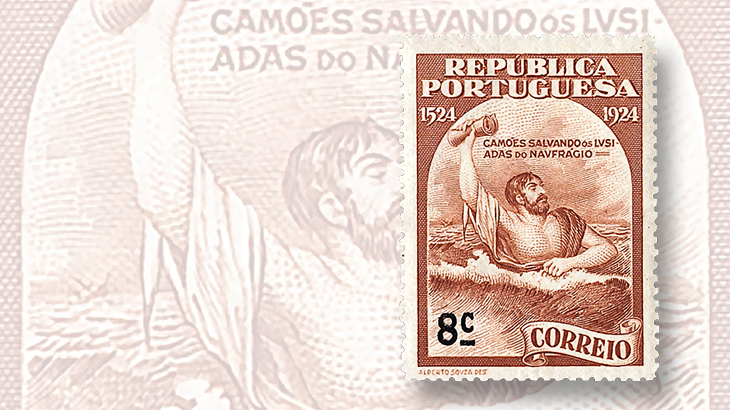 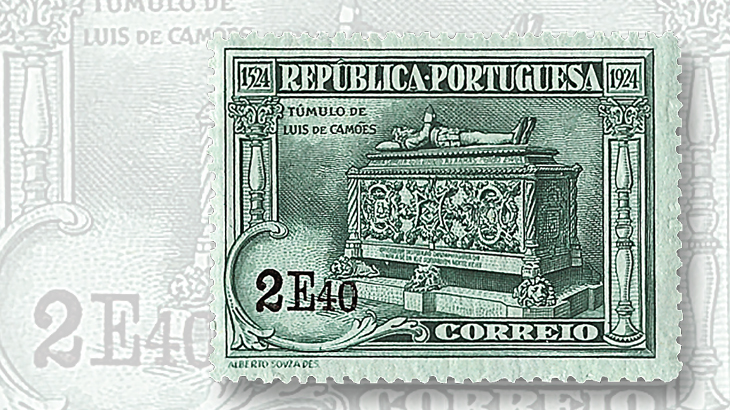 The Portuguese poet Camoens was entombed in a monastery in Lisbon, near the grave of the explorer Vasco da Gama, who has a major role in Camoens’ most famous poem.
Previous
Next

Luis Vaz de Camoens (circa 1524-80) is generally considered to be Portugal’s greatest poet, the equal of Homer, Virgil and Dante, and the father of the Portuguese language. (His name is usually pronounced “Ka-MO-ens” in English and “Ka-MOIZH” in Portuguese.)

His greatest work, an epic fantasy poem titled Os Lusiadas, is narrated by Vasco da Gama (1460-1524), the Portuguese explorer who was the first to sail from Europe to India, around the Cape of Good Hope.

The poem, first printed in 1572, describes Portugal’s voyages of discovery but also its prehistory, when what is now Portugal was a Roman region called Lusitania (whose inhabitants were the Lusitani or Lusiads).

The date of Camoens’ birth is not definitely known, but is generally accepted as 1524, and the day of his death, June 10, is the country’s national day.

Given the national reverence for Camoens, it is odd that the idea of a stamp issue in 1924 for the poet’s 400th birth anniversary came not from the postal administration, but from the Portuguese Red Cross, which was trying to raise money to set up what we would now call an endowment fund.

The stamps were not set up as semipostal issues (which pay postage plus collect a surcharge for charity), and the 1924 set, Scott 315-345 (yes, 31 stamps), in general was no ordinary commemorative stamp issue.

The story of the Camoens set, itself a sort of epic, is detailed in Portugal: Postage Stamps 1910-1943, by Antonio Henrique R. de Oliveira Marques, a 1958 work published in English translation in 1976 by the Portuguese Philatelic Society.

Oliveira Marques wrote that the origin of the Camoens’ stamps “belongs entirely to Alfonso de Dornelas, President of the Portuguese Red Cross, whose intention was to obtain a permanent fund for that organization.”

Dornelas was a writer, archaeologist and official of many organizations at the time.

Dornelas made the stamp proposal in July 1923 to the president of Portugal, who liked the idea and arranged for a meeting with the minister of commerce and communications. The minister approved the idea and told Dornelas to prepare a memo for the post office officials, outlining the idea.

This memo detailed the reasons why Camoens deserved a stamp issue, and then got down to the financial essentials. Dornelas proposed that the stamps “on a day of national celebration to be chosen in 1924, would be on sale at all post-offices in Portugal in place of the usual definitive stamps ‘for that day only’” (actually three days).

Any Camoens stamps unsold after those three days “would be sold to collectors through the Portuguese Red Cross and the income deposited in its permanent fund.”

The final element in Dornelas’ memo stated, “All expenses connected with the issue would be the responsibility of the same Society, which would be obliged to supply to the General Management of the Posts only those stamps calculated to be on daily sale in Portugal.”

In other words, after paying for the production of the Camoens stamps, the Red Cross would give the sales monopoly for three days only to the Portuguese postal administration, and then only in the quantity equivalent to normal daily sales, after which all the stamps would revert to the use of the Red Cross.

Portugal did have a history, dating to 1889, of so-called franchise stamps for the Red Cross and some other groups (see Scott 1S1 and later issues), whereby stamps were supplied as a sort of franking privilege for the groups to use on their own mail, so Dornelas’ proposal might not have seemed too outlandish.

For whatever reason, the minister of commerce and the director of posts agreed to send the plan on to the Portuguese parliament for final approval.

However, by December 1923, nothing had happened to move things along, and the new director of posts told Dornelas that this idea was within the powers of the post office, and parliamentary approval was unnecessary.

Dornelas formally resubmitted his proposal, and it was approved by the postal authorities and minister of commerce in late January 1924.

The question now was how to produce the stamps.

The Portuguese Mint said it was too busy printing currency and postage and revenue stamps. The mint in Madrid and Thomas de la Rue & Co. also declined. The Bank of Portugal refused to help but recommended Waterlow & Sons, Ltd., of London, who had Portuguese representatives, Walker Bros.

Meanwhile, Dornelas still did not have a signed agreement with the post office, and in repeated visits to those officials he began to realize that they were seriously considering issuing the stamps themselves and keeping all the profits.

The minister of commerce, new to the position, promised support, but by the end of March 1924 it was clear that the Red Cross’ plans for funding an endowment were becoming less and less likely.

Finally, on March 28, 1924, the post office presented its official agreement, and it bore little resemblance to Dornelas’ July 1923 proposal.

The printing, issuing and sale of the stamps would be carried out by the General Administration for Posts, but all expenses incurred would be paid by the Portuguese Red Cross, who would be required to hand over an agreed sum before the production began.

The issue “will be as large as possible, in order to supply all post offices,” the agreement stated.

As in Dornelas’ original plan, “the stamps will be on sale to the public for three days when their use will be obligatory in substitution of the normal stamps.” From the proceeds of the three-day sale, a sum corresponding to the normal sale during the same three days would revert to the General Administration for Posts.

Unlike Dornelas’ plan, which gave the surplus stamps to the Red Cross, the new agreement dictated that “the surplus, as well as the income from the sale of stamps when withdrawn from circulation, will revert in equal parts to the General Administration for Posts and the Portuguese Red Cross Society.”

The Red Cross signed the agreement on March 31, adding several provisions: that Portuguese artist Alberto Sousa would create the designs, “which should be of seven types, bearing in mind that the issue would comprise 31 values and 31 different colours.”

The subjects of the seven different designs were specified: Camoens in Ceuta (where the poet served in the overseas militia), Camoens saving the Lusiadas (when he and his manuscript were in a shipwreck off the coast of Cambodia), portrait of Camoens, title page of the Os Lusiadas first edition, and Camoens’ death, tomb (in a monastery in Lisbon, near the grave of Vasco da Gama), and monument (also in Lisbon).

The stamps would not be printed for use in Portugal’s colonies, “as this would raise a question of principle with the Colonial Ministry.”

The postal administration accepted all of these ideas on April 1.

Sousa quickly went to work and was paid 6,000 escudos for the seven designs on May 28 (in this era, the currency exchange rate was approximately U.S. $1.08 to one escudo).

A postal decree of July 5 said that use of the Camoens stamps would be obligatory on Nov. 11, 12, and 13, 1924, and contracts were signed on July 31 between the post office and the Red Cross, and between those two entities and Waterlow & Sons.

“Fundraising” was taking on definite aspects of expensive gambling for the Red Cross.

Sousa’s designs were sent to Waterlow in London and its engravers J.A.C. (John Augustus Charles) Harrison and George R. Fairweather divided up the work of the seven different vignettes.

The denominations matched those of the existing Ceres definitive issue (from 2 centavos up to 20 escudos), with the exception of the 5e, which was replaced by a 4.50e, paying the parcel rate.

The stamps were recess-printed in sheets of 100 (10 by 10) and then perforated gauge 14 or 14½. The denominations were typographed in black in a separate operation.

Waterlow chose the stamp colors, except for the 32-centavo, 96c, and 1.6e, which had to be a shade of green, red and blue, respectively, to meet the international postal rules.

More than a year after Dornelas began his campaign, the stamps finally arrived in Portugal from London, on Oct. 20.

A printing error was discovered on one sheet of the 3e stamps, where 60 of the 100 were missing the denomination. The errors supposedly were “invalidated” in the presence of the head of the postal administration but enough examples survive for the Scott Classic Specialized Catalogue of Stamps and Covers 1840-1940 to have assigned a number to them: Scott 341b.

A doubled denomination of the 3e, Scott 341a, also exists, and has the highest catalog value of the set: $125 mint or used.

Only 30 percent of the Camoens issue sold on the three designated days in November, but that still meant more than 2.25 million stamps of this colossal set (the population of Portugal at the time was 6.3 million people).

Regular issues returned to sale on Nov. 14, and the Camoens issue was available in post offices “for philatelic purposes,” according to the Oliveira Marques book, from Nov. 14-21.

Beginning Feb. 2, 1925, they were available to philatelists at face value from the Portugal Mint. They were on sale from the mint until July 14, 1926, when the remaining stamps were turned over to the Red Cross, which would be allowed to retain all the proceeds from any sales, thereby negating the original agreement for a 50-50 split between the post office and the Red Cross.

The Red Cross then suspended all sales of the stamps, saying that it was formulating a plan. Soon after, on July 31, the Red Cross put the stamps back on sale, while holding back 30,956 complete sets. Sales ended again on Nov. 17, supposedly to arrange for sets of covers to be prepared for the philatelic market.

The financial summary in the Oliveira Marques book of the costs and sales of the Camoens stamps literally doesn’t add up, but it seems clear that the Red Cross did not do well from this hopeful scheme, which defied all the rules and customs of legitimate governmental stamp production and distribution.

The face value of the stamps printed was about 12.25 million escudos, but the value of those sold by the end of 1926 was only about 1.2 million escudos. After paying all its obligations, the Red Cross netted only 148,631 escudos.

Meanwhile, collectors’ impressions in the United States and in England were that Portugal was continuing a long campaign to swindle philatelists through oversized, speculative issues. The collecting community does not seem to have realized that the Red Cross was trying to benefit from the Camoens set, or there may have been more sympathy toward the stamps. How and where the stamps were available after their initial issuing date also does not seem to have been made clear to collectors.

The editor of the Stanley Gibbons Monthly Journal of January 1925 commented sarcastically that “a series commemorating so famous a son of Portugal is justified, but it should not have been ‘sold out’ within a few days (or was it hours?) of issue, if its real object was to do honour.”