Price and Walske collections auctioned by Siegel in March 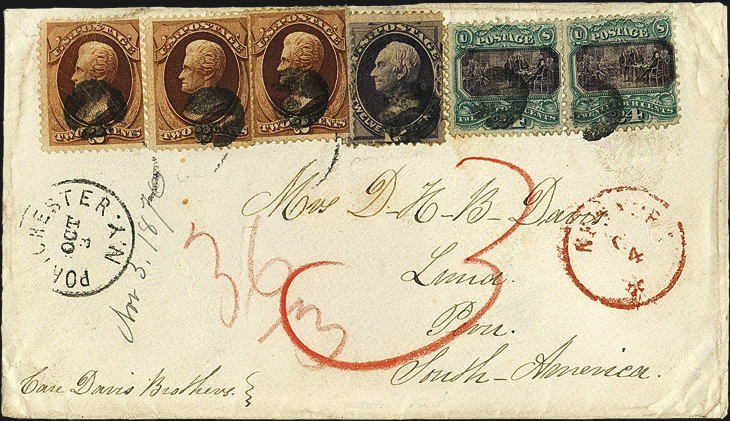 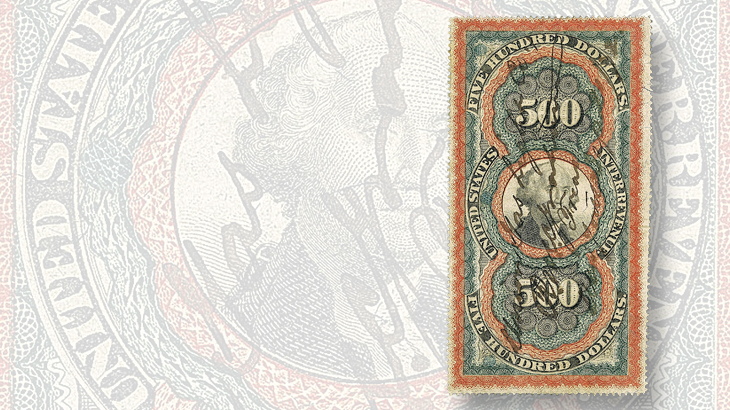 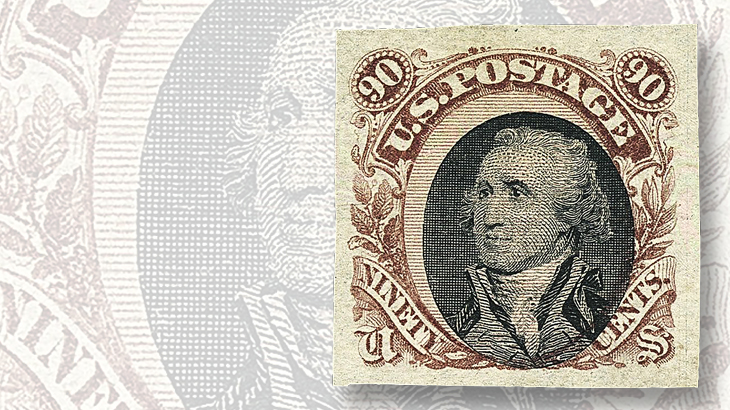 A plate essay on stamp paper of the 1869 90¢ stamp with Washington’s portrait rather than Lincoln’s brought $161 at the Siegel sale of the Price collection. 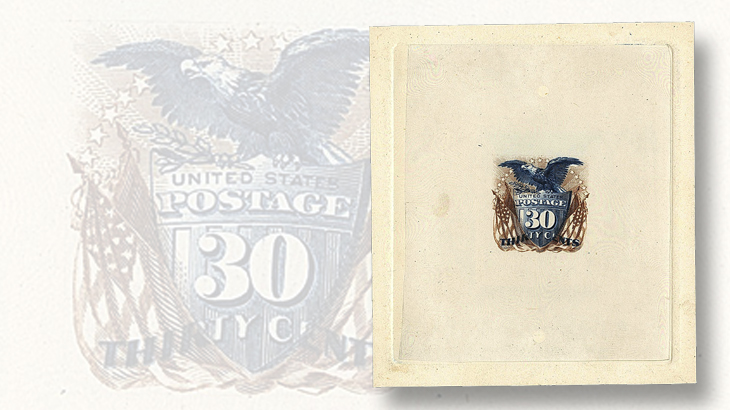 Also from the Price collection in Siegel’s March sale, a large-die trial color proof of the adopted Eagle and Shield design in deep brown and blue rather than ultramarine and carmine sold for $3,450. 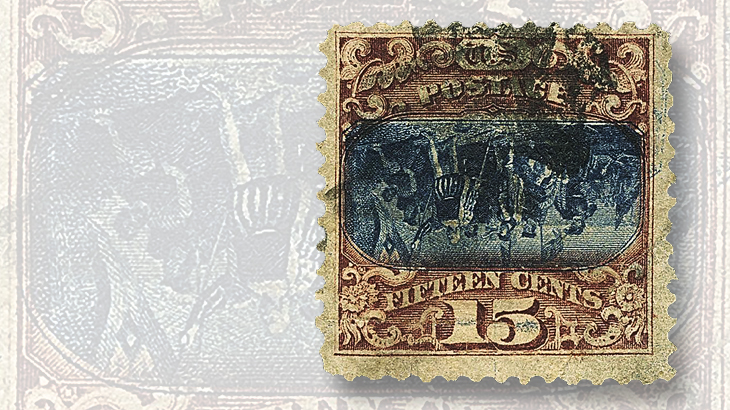 A used example of a rare variety of the 1869 15¢ Landing of Columbus stamp with central vignette doubled, one inverted, brought $13,800 at the Siegel March sale of the Don David Price collection. 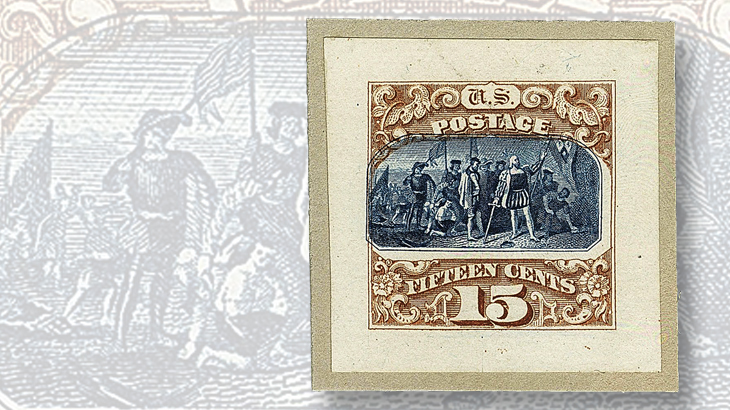 A small die proof of the 1869 15¢ Landing of Columbus, from a Theodore Roosevelt presentation album, sold for $287.50 at a Siegel sale in March. 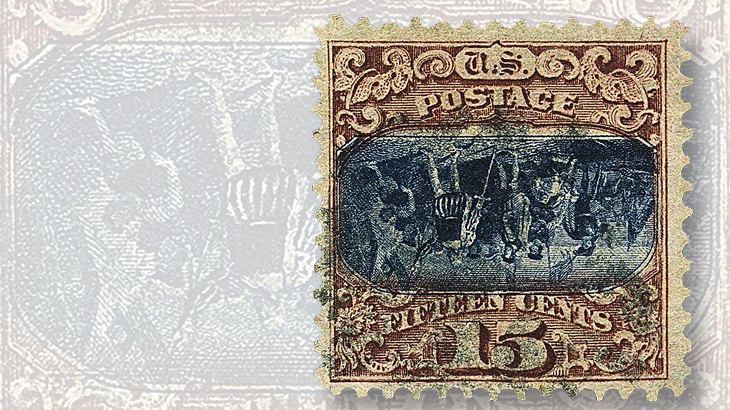 From the Don David Price collection sale at the Robert A. Siegel Auction Galleries in March, a very fine example of the 1869 15¢ issue with few flaws brought $12,075. 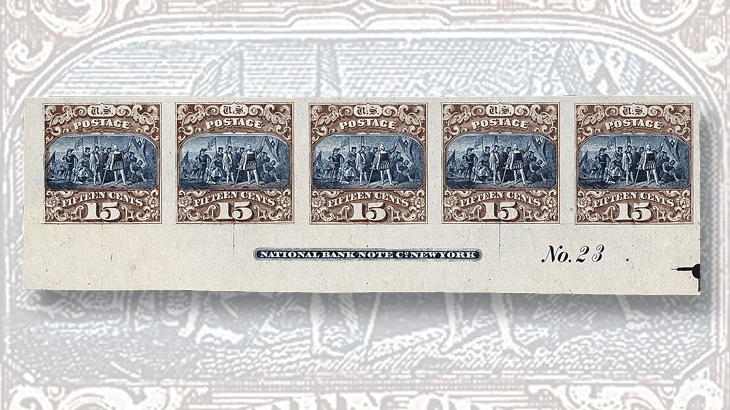 An imperforate plate-proof strip of five of the 1869 15¢ Landing of Columbus, type II, sold for $805 at Robert A. Siegel’s sale of the Don David Price collection in March. 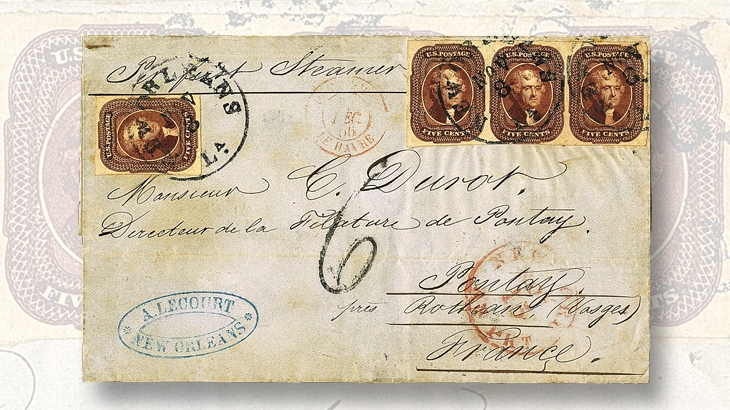 Four 1856 imperforate 5¢ red brown Thomas Jefferson stamps frank this 1856 cover mailed to Pontay, France, via American packet rate. The cover, from the Steven Walske collection, was sold March16 by Siegel for $71,875.
Previous
Next

Robert A. Siegel Auction Galleries held a series of sales in mid-March, beginning with Don David Price’s remarkable collection of United States bicolor issues on March 15. The sale was previewed in Linn’s issue of March 14.

“I began stamp collecting in 1991, when my father’s collection was sold,” wrote Price in the introduction to the sale catalog. His father, once an avid collector, had passed away unexpectedly in 1961, and his collection had lain dormant for 30 years.

The younger Price wanted to keep a memento of his father, so he held on to four Pan American series inverted-center errors of 1901, as well as his father’s example of the famous 24¢ Inverted Jenny — the first U.S. airmail stamp of 1918, with the biplane in the center misprinted upside-down. (Price’s Inverted Jenny was not included in the March sale.)

Those five stamps formed the basis of Price’s own collection, which soon became focused on U.S. bicolor issues. These held a special fascination for him, because of the coveted inverted centers that sometimes resulted from the printing process.

Again quoting from the auction catalog: Don David Price found himself “fascinated by the stories behind these government printing errors,” and gradually developed an international gold-medal award-winning exhibit that also encompassed the 1869 pictorial series and the 1873 State Department high-denomination Official stamps.

Over the course of 24 years, he added essays and proofs, trying to round out the story of each stamp’s development.

“What started as a legacy to my father has grown to become a great personal achievement. Now, in time for collectors and exhibitors to enhance their own collections before World Stamp Show [New York 2016], I would like to give others the opportunity” to own the items, Price concluded.

The only international show in the United States for this decade, with an extraordinary 700 competitive exhibits filling more than 4,000 frames, World Stamp Show-NY 2016 has top collectors all over the world working feverishly to fine-tune their exhibits before the show opens May 28 in New York City.

One of the most beautiful, and comparatively affordable, items was an imperforate plate-proof strip of five of the 15¢ Landing of Columbus, type II, on India paper (Scott 119P3), showing the National Bank Note Co. imprint and plate number 23 in the bottom margin. The type I version of the 15¢ has horizontal shading around the vignette and a blank space above it; type II has diagonal shading and a small diamond in the blank space.

Described as extremely fine and rare, the strip went for $805, including the 15 percent buyer’s premium that Siegel adds to all lots.

“Roosevelt presentation albums” were special sets of postage stamp reprints handed out to VIPs between 1903 and 1905, during Theodore Roosevelt’s presidency. Most of the original 85 albums have since been cut up.

A small die proof of the 1869 15¢ Landing of Columbus from a Roosevelt album, its vignette shifted to the left and still on its telltale gray card backing, sold for $287.50.

Used examples of the issued 1869 inverts dominated the sale. A very fine example of the 15¢ (Scott 119b) with a light cork cancel leaving the design clearer than usual, and only a small thin spot and trivial corner crease to detract, went for $12,075.

A rare variety of the 15¢ has the central vignette printed double, one inverted (Scott 119c).

Siegel president Scott R. Trepel studied this rare variety, of which only three examples are known, and wrote about it in 1999, arguing that “the upright impression of the vignette, which in all three cases is faint, was created as a result of offset when the sheet was accidentally folded over on itself and stacked.”

The used example from the Price collection, “defective and repaired but very presentable,” sold for $13,800.

The six stamps paid triple the 22¢ rate for carriage on American and British packet ships via Panama. Called “one of the most spectacular” covers of the 1869 issue, it sold for $43,125.

Besides the issued designs and colors, the Don David Price collection revealed some that were discarded on the way.

On March 16, Siegel offered Steven Walske’s collection of U.S.-France trans-Atlantic mail. This sale was previewed in Linn’s issue of March 14.

An attractive cover bearing four examples of the 1856 5¢ Thomas Jefferson stamp (Scott 12), sent from New Orleans via New York to Pontay, France, in late 1856, was said to be a unique example of the 20¢-per-half-ounce contract rate correctly paid with this stamp, before the rate was reduced to 15¢ by a new treaty.

The cover was carried on the steamship Fulton, which along with another ship, Arago, made only 12 trips during the period. It sold for $71,875.

A petite, embossed-border envelope from New Orleans to Paris got caught in the crossfire of the Civil War, turning it into what Siegel described as “one of the quintessential covers of American postal history.”

Mail from the South to the North was gradually choked off during the summer of 1861, as Union postal operations in southern cities ceased. The post office in Louisville, the last transit point, built up a backlog of northbound letters, which were finally forwarded on June 27 with a blue “SOUTHN LETTER UNPAID” handstamp, indicating their U.S. stamps had been invalidated.

“Because the U.S.-France treaty had a provision for unpaid mail, this cover was allowed to go through the U.S. mails with no postage due until arrival in France,” the Siegel catalog noted. Of 29 surviving covers with this historically significant marking, the one from the Walske collection is one of just five to a foreign destination.

Among the “Outstanding United States Stamps” offered by Siegel on March 18, the top realization was for an unused 12¢ dull violet Henry Clay stamp with an “H” grill (Scott 140), from the National Bank Note issue of 1870.

Grills were patterns of points pressed into the backs of stamps, part of a short-lived attempt in the 1860s and 1870s to make it harder to clean and reuse stamps.

Siegel asserted that “the 12¢ is the most difficult denomination to obtain in sound, original-gum condition.” Rattling off some famous-name collections, the auction description went on: “Caspary, Ewing, Lilly, Morris, ‘Angel’ and Floyd never had one.”

Well-centered and with a “proof-like” impression, the stamp bested its value in the Scott Specialized Catalogue of United States Stamps and Covers to sell for $34,500.

An imperforate strip of three of the first duck stamp of 1934 (Scott RW1a), from what is believed to have been the only pane of 28 issued imperforate, went for an impressive $29,900. This strip had been off the market since it was offered in 1972.

A trial color proof of the 1945 duck stamp (RW12), on India paper sunk on a large card signed by the artist, sold for $20,700. The stamp was issued in black, and this trial color proof in dark blue is unlisted in the Scott U.S. Specialized catalog.