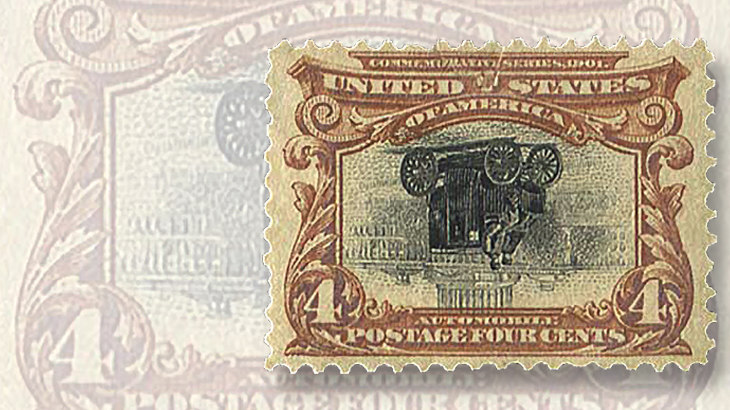 The May 14-15 Regency-Superior auction in St. Louis will include this unused United States 1901 4¢ brown and black Pan-American Automobile stamp with inverted center.

Regency-Superior Auctions of St. Louis, Mo., will hold a stamps and postal history auction May 14-15 at the firm’s St. Louis gallery. The auctions begin at 11 a.m. Central Time on each day.

The sale includes almost 2,500 lots of United States, British and worldwide singles and sets, including classic U.S. stamps and proofs, plate blocks, sheets, errors, postal stationery, revenues, and other back of the book material.

The worldwide material has a solid selection of China-related material and a large section of Germany and area.

Two attention grabbers in this sale are U.S. classics with inverted centers: the 1869 15¢ brown and blue type II Landing of Columbus (Scott 119b) and the 1901 4¢ brown and black Pan-American Automobile stamp (296a).

The used 1869 stamp is described by Regency-Superior as an incredibly choice example having very fine centering with a light cancel, “especially so on the vignette.” The inverted center is easily seen with a light strike of the cancellation marking.

The 1975 Philatelic Foundation certificate reads “defective spot in the grill,” which Regency-Superior identifies as a small repair.

The 4¢ Pan-American invert was not an error in the traditional sense: It was created as a special printing following a request from Third Assistant Postmaster General Edwin C. Madden. Two sheets of 200 were printed.

Some stamps were overprinted “Specimen,” others were destroyed, but 203 stamps were distributed as gifts from Madden, or through the sale of stamps from a pane of 100 donated to the Post Office Department for the National Museum in Washington, D.C.

The unused stamp in the Regency-Superior auction is described as having extremely fine centering, with a small repair and reperforated at top. The original gum is present but disturbed; overall the stamp has an “extremely fine appearance.”

A nice imperforate block of four of the 1930 2¢ carmine rose General von Steuben issue also is on offer.

The von Steuben stamp is known imperforate from just one pane of 100, so multiples such as this block of four are rare.

The block is lightly hinged on the top pair, with the bottom pair mint never hinged. Position numbers are lightly penciled on the back of the stamp. A dividing line is clearly seen across the top margin.

The imperforate block of four is offered with a $7,000 estimate.

The China material in this auction includes an unusual vertical pair of the 1913 1¢ orange Junk from the London printing (Scott 203) that is imperforate horizontally — not the vertical pair imperf between listed in the Scott catalog.

Regency-Superior identifies the item as a variety of Scott 203, “Likely from 1920 late re-issue of London Print stamps, probably unique error, one of the rarest perforation errors of China.” The pair is struck twice with a July 1, 1921, circular cancel from Harbin. It is listed with an estimate of $2,000.