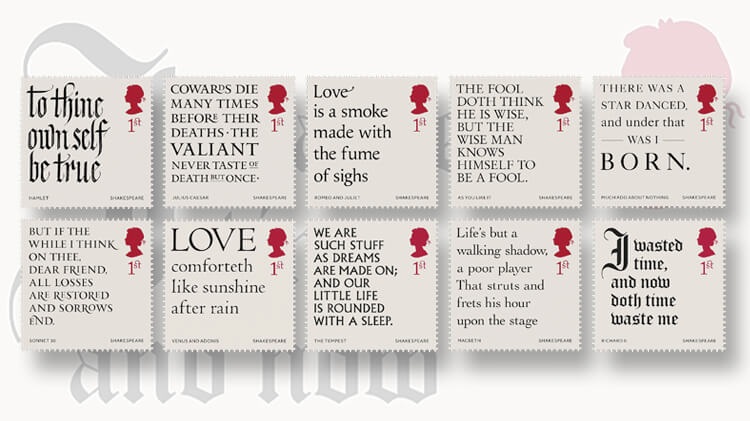 Great Britain’s Royal Mail issued 10 stamps April 5 commemorating the 400th anniversary of the death of William Shakespeare. Each stamp design features a quote from one of his works.

Great Britain’s Royal Mail is allowing William Shakespeare’s words to speak for themselves on its latest set of stamps honoring the playwright and poet.

Royal Mail issued the 10 stamps April 5 to commemorate the 400th anniversary of Shakespeare’s death. Each stamp shows a different quote from one of his plays or poems.

In announcing this Shakespeare set, Royal Mail said that it pays “tribute to the genius of Shakespeare through his immortal words and poetry.”

The press release also said, “Having previously issued stamps that depict performances of his plays, a painting of the bard himself and the world famous Globe Theatre, for this set Royal Mail has opted to focus on selected quotes from plays and sonnets that have made him so famous and ensured an enduring popularity.”

Shakespeare also has been honored on other Royal Mail stamps, including a stamp in the 1988 Australia Bicentennial joint issue showing Shakespeare and John Lennon (Scott 1225); a stamp in the 1982 Performing Arts set featuring a scene from Hamlet (Scott 989); and a 1995 Greetings in Art stamp showing an illustration by Eric Gill for All the Love Poems of Shakespeare, published in 1947.

Considered by many to be the world’s greatest writer and dramatist, and regarded as England’s national poet and playwright, Shakespeare was born in April 1564 in Stratford-upon-Avon. He died April 23, 1616.

According to the Folger Shakespeare Research Library in Washington, D.C., which houses the world’s largest Shakespeare collection, he wrote at least 38 plays and more than 150 poems.

These works have been translated “into every major living language,” according to the library, and continue to be performed around the world.

The new stamps from Royal Mail are se-tenant (side-by-side) in two strips of five.

All of the stamps are nondenominated. The “1st” in red under a red silhouette of Queen Elizabeth II indicates that the stamps pay the first-class rate (currently 63 pence).

All five of the stamps in the first strip reproduce lines from Shakespeare’s plays. The first three are from his well-known tragedies.

Starting on the left is “To thine own self be true” from Hamlet, Act 1, Scene 3.

A line from Julius Caesar, Act 2, Scene 2, is next, “Cowards die many times before their deaths — The valiant never taste of death but once.”

From the first scene in Romeo and Juliet is “Love is a smoke made with the fume of sighs.”

The other two stamps in the first strip feature lines from Shakespeare’s comedies: “The fool doth think he is wise, but the wise man knows himself to be a fool” from As You Like It, Act 5, Scene 1; and “There was a star danced, and under that was I born” from Much Ado about Nothing, Act 2, Scene 1.

The second strip of stamps begins with Sonnet 30, published in 1609, “But if the while I think on thee, dear friend, all losses are restored and sorrows end.”

The next stamp shows line 799 from the 1,194-line narrative poem Venus and Adonis, published in 1593, “Love comforteth like sunshine after rain.”

Three quotes about life from Shakespeare’s plays round out this issue: “We are such stuff as dreams are made on; and our little life is rounded with a sleep” from The Tempest, Act 4, Scene 1; “Life’s but a walking shadow, a poor player that struts and frets his hour upon the stage” from Macbeth, Act 5, Scene 5; and “I wasted time, and now doth time waste me” from Richard II, Act 5, Scene 5.

The Chase, a graphic design firm founded in 1986, designed the Shakespeare stamps.

The calligraphy on the Hamlet stamp is by Peter Horridge.

International Security Printers printed the stamps by lithography in sheets of 50, sold in panes of 25 in most postal outlets.

Royal Mail products offered in conjunction with the Shakespeare set include first-day covers, 10 postcards reproducing the designs of the stamps, and a presentation pack.

The pack contains mint examples of the stamps, and text by scholar and biographer Jonathan Bate, including information about Shakespeare’s personal and professional life.

Information is also available online at the Royal Mail's website.