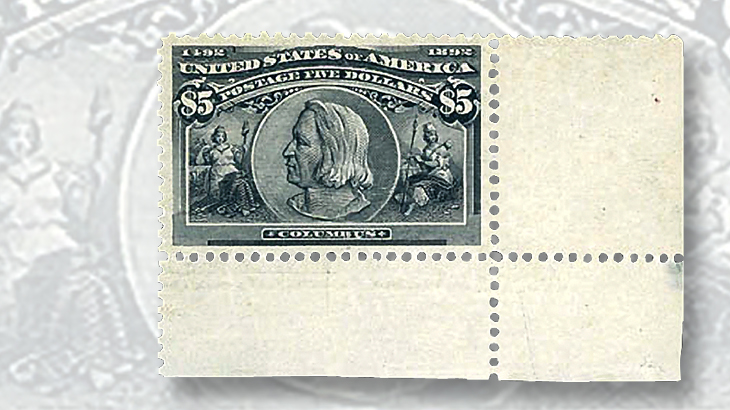 A bottom-right corner margin single of the United States 1893 $5 Columbian, which has been graded Superb 98. The stamp will be offered during the Schuyler Rumsey auction at the Westpex 2016 Stamp Show near the San Francisco airport.

Schuyler Rumsey Philatelic Auctions of San Francisco, Calif., is the official show auctioneer for the Westpex 2016 Stamp Show. The show is taking place April 29 to May 1 at the San Francisco Airport Marriott Waterfront Hotel, 1800 Old Bayshore Highway, in Burlingame, Calif.

Details of the show were published on page 66 in the monthly Linn’s Stamp News magazine dated April 18.

The Rumsey auction will begin at the hotel on April 28, one day before the show opens, and run for four sessions, ending Sunday, May 1.

The first session on Thursday opens with United States and worldwide coins and currency before moving into Great Britain, British Commonwealth, and worldwide stamps.

The Commonwealth issues include a sharp-looking octagonal-cut British Guiana 4¢ black on magenta stamp (Scott 14), looking very much like its close relative, the well-known 1¢ black on magenta (13), the only known example of which sold for just under $9.5 million in 2014.

The 4¢ stamp offered in the Rumsey auction is still on the trimmed piece of envelope paper to which it was affixed more than a century and a half ago. It is initialed “E.D.W.” (all the stamps were marked by one of four sets of initials prior to being issued), and struck with the Demerara town cancel, overlapping the stamp to neatly tie it to the backing paper.

Rumsey describes it as having a crisp impression on fresh deep colored paper, accompanied by a 1958 Philatelic Foundation certificate. The auction catalog provides a Stanley Gibbons catalog value of £25,000 ($35,590) and the Scott catalog value of $25,000 for the used stamp.

Distinctive worldwide postal history pieces pop up throughout this auction, such as the Finland 1856 5-kopeck Arms stamp (Scott 1), tied with an 1858 postmark from Raumo on a cover to Bjorenborg.

The auction also is deep in Mexico, with stamps and postal history from two award-winning collections of Mexico: the 1868 Hidalgo issue, and Mexico registered mail, according to Rumsey.

Some of the Mexico postal history also is very appealing, such as the 1866 folded letter to Celaya from San Louis Potosi. The cover bears the first three issues of the 1866 Emperor Maximilian set (Scott 26-28), creating a wonderful three-color franking, including a horizontal pair of the 7-centavo lilac gray. It is offered with an estimate of $7,500 to $10,000.

In the final three sessions, the auction presents its offerings of U.S. postal history and stamps, with a range of important American classics.

The stamp has a 1993 Philatelic Foundation certificate and a 2005 Professional Stamp Experts graded certificate with a grade of Superb 98, which turns up a value of $15,000 in the Scott U.S. Specialized By Grade listings, and $16,500 in the Stamp Market Quarterly.