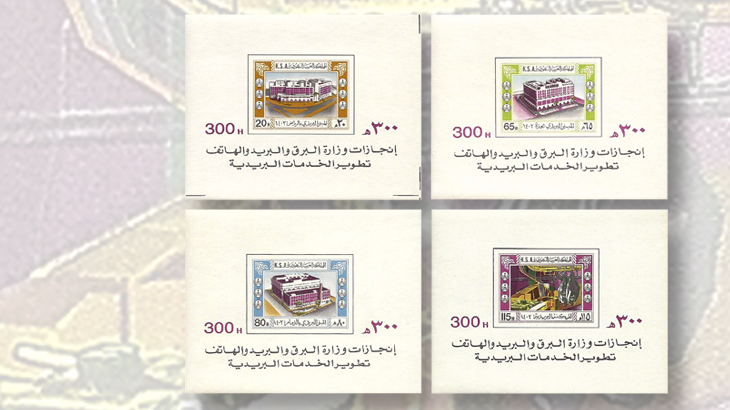 The four souvenir sheets in Saudi Arabia’s 1982 New Regional Postal Centers set include imperforate versions of the stamps and are denominated 300 halalas. 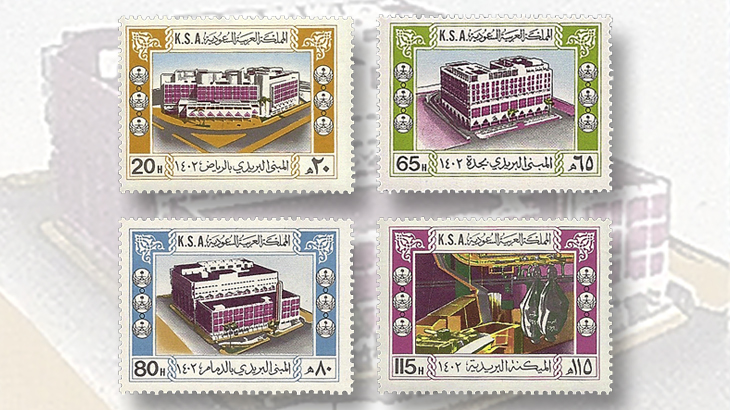 The Saudi Ministry of Post, Telephone and Telegraph built three new postal centers in Riyadh, Jeddah and Dammam, in accordance with modernizing its postal service, during the third Five-Year Development Plan (1981-1985).

State-of-the-art for their time, they were equipped with mechanized sorting machines, private postal boxes, mosques, restaurants for the staff, and a training center.

These new buildings were going to create a postal distribution service that would be of the highest quality and efficiency for the kingdom.

To celebrate these great postal achievements, the Directorate General of Posts issued a set of four stamps and four souvenir sheets July 14, 1982.

This was the first set of stamps issued during the reign of Fahd bin Abdulaziz Al Saud, king of Saudi Arabia from 1982 until 2005.

In 1983, the three postal centers opened to the public.

The postal center in Riyadh was inaugurated on May 2, 1983, by Emir Salman bin Abdulaziz Al Saud, Governor of Riyadh. On Jan. 23, 2015, the emir was crowned as the new king of the country.

The Directorate General of Posts designed the stamps, and the Government Security Printing Press in Riyadh printed them by lithography on white, unwatermarked paper in sheets of 50. The stamps are perforated gauge 14.

The four different designs of the souvenir sheets all bear the same 300h denomination. Only 10,000 of each design were issued.

Three of the stamps show views of the postal centers in Riyadh, 20h; Jeddah, 65h; and Dammam, 80h.

All of these views appear to be architectural models.

The central design of the 115h stamp depicts what appears to be a drawing of automated postal sorting.

The ornate frame surrounding the central designs is the same on all the denominations, except for the color, face value, and some of the inscriptions.

In the top central panel of this frame, the initials of the country name, “K.S.A.,” are at left, and the country name “The Kingdom of Saudi Arabia” is in Arabic at right.

The logo of the Saudi Post appears in the two upper corners. In the two bottom corners are the denomination and currency in English at left and in Arabic at right.

On the 20h, 65h and 80h stamps, the bottom central panel includes the location of the postal center shown in that particular design, followed by the Hijri year 1402.

Inscribed in the bottom central panel of the 115h stamp is “postal mechanization” with the Hijri year 1402.

All of the inscriptions are in Arabic, and the Hijri year corresponds to the Gregorian year of 1982.

The four souvenir sheets include a design of one of the stamps, but without perforations.

At the bottom of the stamp in the souvenir sheets is the denomination and currency of 300h, in English at left and in Arabic at right.

Underneath each of the imperforate stamps is a two-line inscription in Arabic that translates to: “Accomplishments of the Ministry of Telegraph and Post and Telephone — Improvement of Postal Services.”

This set of stamps can be found on first-day, philatelic, and commercial covers. I have seen the souvenir sheets only on philatelic covers.

This set is easily obtained, and the multicolored stamps and souvenir sheets create a beautiful display page in any collector’s album.