Siegel auctions May 4-6 to offer independent mails, postal history of United States and the Confederacy 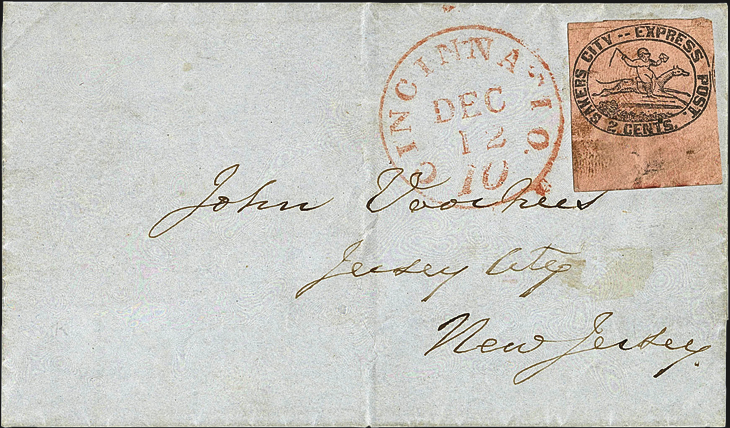 In the Robert A. Siegel Auction Galleries auction taking place May 5-6, postal history of the United States and Confederate States will be featured. This folded letter mailed using Baker’s City Express Post in 1849 is one of only four recorded covers fran 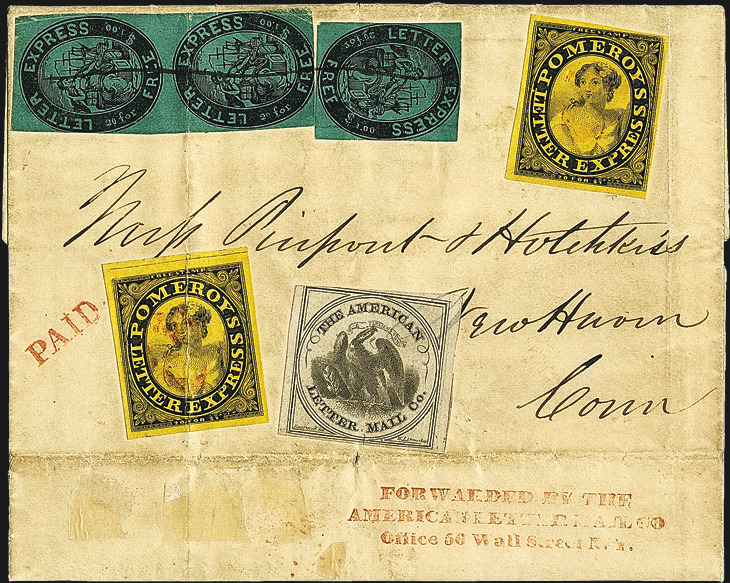 The only known cover franked with stamps of three independent mail companies. Mailed in 1844 from Cleveland to New Haven, Conn., it will be auctioned May 4 by Robert A. Siegel Auction Galleries in New York City.
Previous
Next

The Dr. Carmen A. Puliafito collection of United States independent mails will be auctioned Wednesday, and a selection of U.S. and Confederate postal history will be offered Thursday and Friday.

In the introduction to the Puliafito catalog, Siegel president Scott R. Trepel describes the collection formed by Puliafito as the greatest that has ever been assembled, “This collection is historically the most complete, with the largest number of important pieces ever gathered in one place.”

The collection features stamps and postal history of the independent companies that carried mail between larger cities beginning in 1843, and continuing until 1845, when a postal reform act enforced a government monopoly on most mails and brought an end to their private operations.

For any student of philately interested in learning more about the history of independent mails, the PDF version of the auction catalog, which can be viewed online at the Siegel website, provides a valuable summary. A printed version of the beautifully illustrated auction catalog is also available from Siegel for a fee that covers mailing and handling costs.

It’s also worth noting that a limited-run 680-page reference book by seven authors (including Trepel) titled Eastern Independent Mail and Express Mail Companies 1840-1845 is being offered for sale. Details and ordering information about the book are published on the Index to Companies page in the Puliafito catalog.

The auction is organized quite naturally by the various companies that provided mail services. Adhesive stamps and stamps used on cover are identified by Scott catalog numbers; such issues are listed among local stamps in the Scott Specialized Catalogue of United States Stamps and Covers.

Other firms, such as Jerome & Co.’s Express from Boston, and Bates and Co. from New Bedford, used identifying handstamps.

A large 50-lot group representing American Letter Mail Co., which operated to and from New York, Philadelphia and Boston, leads off the auction with proofs, stamps and plenty of postal history.

This section includes the largest recorded block of the American Letter Mail Co. black large eagle stamp (Scott 5L2), listed with an estimate of $10,000 to $15,000.

A single American Letter Mail stamp is among the adhesives on one of the most dramatic pieces in the collection, an 1844 conjunctive service use and mixed franking that also shows stamps of Letter Express established by Henry Wells, and Pomeroy’s Letter Express, which carried mail principally in New York State.

According to the catalog description, “This spectacular cover demonstrates the cooperation among Independent Mail companies that allowed them to provide service across a huge area for significantly lower rates than the U.S. Post Office charged.”

It is the only independent mail cover extant with stamps of three different companies, according to Siegel, “universally acknowledged to be the most valuable and important cover of the independent mail era.”

Among these are offerings from the Calvet M. Hahn collection, and two items filed under the heading “Mail Robbery”: an 1843 folded letter clearly marked with a handstamp reading “This Letter was in the Mail that was robbed at/Evans, N.Y., May 21st, 1843,” and an 1861 buff cover with the manuscript notation “The Mail Pouch was stolen this morning cut open & letters violated.”

The local posts lots include a rare use of the 2¢ black-on-pink Baker’s City Express Post of Cincinnati, Ohio, on cover, addressed to Jersey City, N.J. It is one of only four recorded covers with this stamp, and the finest of the four, according to Siegel.