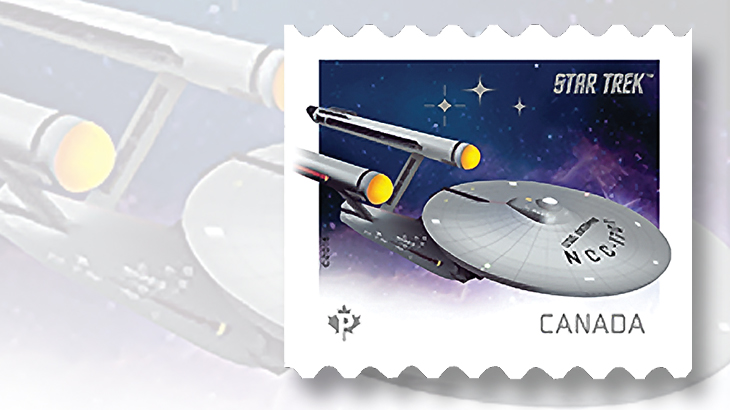 The starship Enterprise from the original Star Trek series, first broadcast 50 years ago. 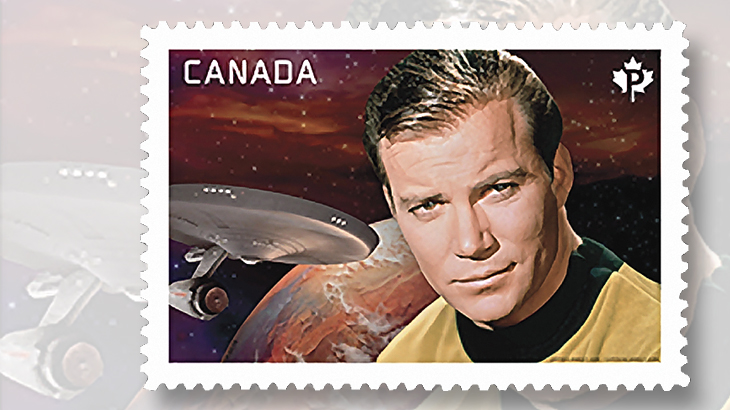 Canada Post has just beamed up a pair of stamps that will thrill Star Trek fans throughout the galaxy.

The two new stamps celebrate the 50th anniversary of the popular science fiction television series that debuted in September 1966 on NBC in the United States, and CTV in Canada.

The stamps appear to be in two different formats: a horizontal commemorative featuring Canadian actor William Shatner in his role as Starship Capt. James T. Kirk, and a smaller coil stamp picturing the Starship USS Enterprise.

Both stamps carry permanent-rate denominations for first-class letters, currently 85¢ for up to 30 grams (roughly 1 ounce).

The stamps were introduced by Canada Post on Twitter and on YouTube, where an 80-second video shows Star Trek fan Line Rainville in her home in Montreal, Quebec, Canada. Rainville has renovated her basement to resemble the set of the original series. In the video, she materializes in the basement via the Star Trek transporter and admires the new stamps on two large envelopes.

“Oh my, best delivery ever!” she says.

The link includes the video with Rainville and images of the two stamps.