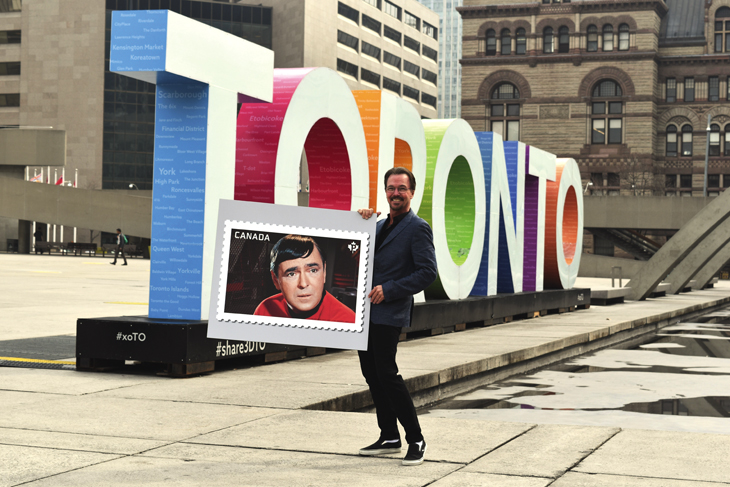 Chris Doohan in Toronto, with a larger-than-life illustration of the forthcoming Star Trek stamp from Canada Post honoring his father, James Doohan. 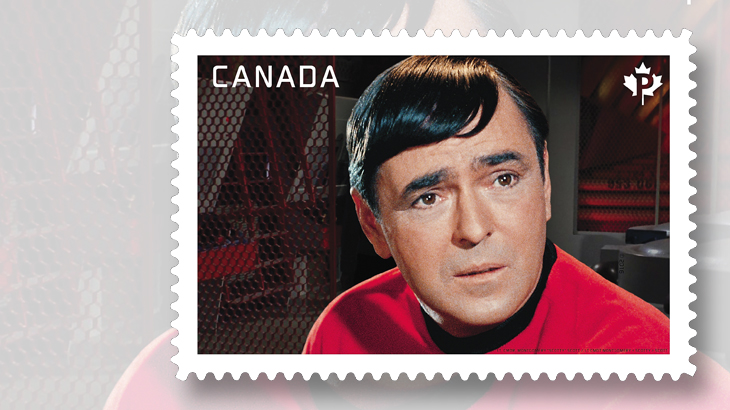 Canadian-born actor James Doohan (1920-2005), famed for his role as chief engineer Montgomery Scott on the original Star Trek television series and in a series of later Star Trek feature films, will be honored in character on a permanent-rate stamp that will be issued by Canada Post.

The stamp is the fourth Star Trek design revealed by Canada Post this month.

The horizontal stamp design was first shown April 22 in Toronto, Ontario, by Canada Post and Doohan’s son Chris during an appearance on the Toronto television morning show CP24 Breakfast. Chris also appeared that same evening on ET Canada to introduce the design.

Though his famous character was Scottish through and through, James Doohan was born March 3, 1920, in Vancouver, Canada, the son of immigrants from Northern Ireland. Doohan served in the Royal Canadian Artillery during World War II and in the D-Day combat landing on Juno Beach.

After guest appearances on numerous TV shows, Doohan landed the role of “Scotty” on Star Trek in 1966, and played the character in the six feature films that followed the end of the series, from 1979 to 1991. He also appeared in Star Trek: Generations in 1994, and in other productions of the Star Trek universe.

The three previous Canada Post Star Trek designs have pictured William Shatner as Capt. James T. Kirk on a commemorative stamp similar to the Scotty design, the Starship Enterprise on a coil stamp, and Leonard Nimoy as Spock, also in commemorative format. Full details of the set, and the planned issue date, have not been officially revealed by Canada Post, though information released with the "Scotty" stamp design added, "More stamps are to be revealed soon."