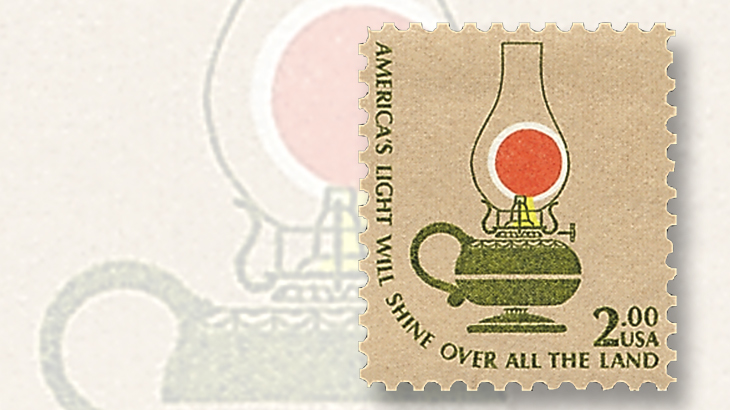 Although second among the three dollar-denominated Americana stamps, the $2 Kerosene Table Lamp was the first to be issued, on Nov. 16, 1978. 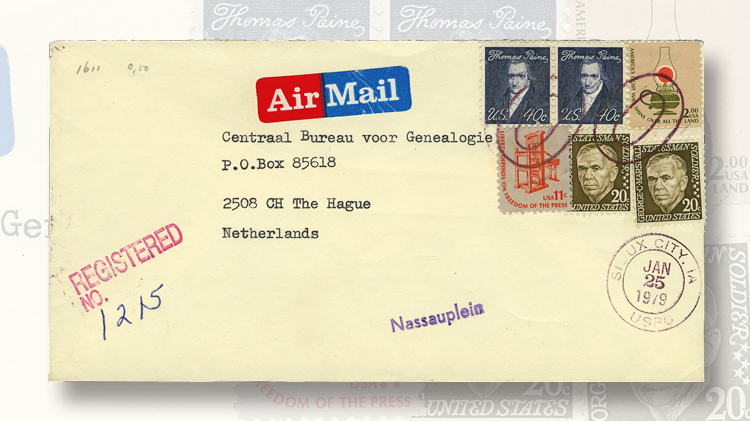 The $2 Kerosene Table Lamp on this January 1979 registered cover to The Hague in the Netherlands was used a little more than two months after the stamp was officially issued. The six-stamp franking exactly satisfies the required $3 registry fee and 31¢ ai 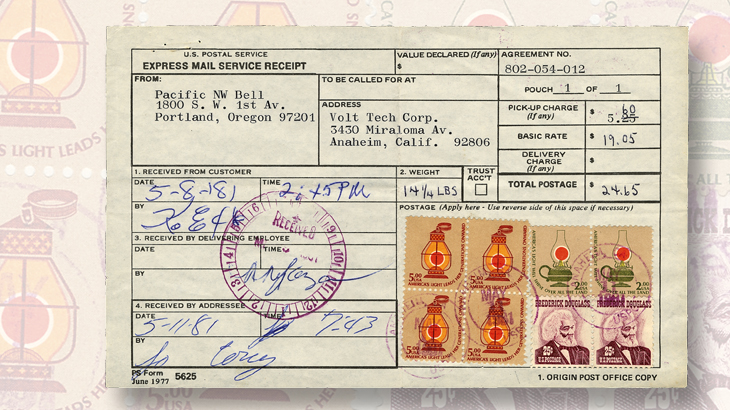 Among the more unusual uses of the $2 Kerosene Table Lamp in the author’s collection is this 1981 Express Mail service receipt documenting the sending of an item weighing 14¼ pounds from Portland, Ore., to Anaheim, Calif. A pair of the $2 stamp was used w
Previous
Next

Among the three dollar-denominated stamps in the United States 1975-81 Americana definitive (regular-issue) series, the $2 stamp was issued first, on Nov. 16, 1978.

My April column focused on the $1 Rush Lamp and Candle Holder stamp.

In keeping with the design structure of the series, the $2 stamp (Scott 1611) features a central vignette bordered on two sides by a quotation that speaks to a central theme of the nation’s founding and its principles.

Suitable to this theme of illumination is the quote (also in dark green) that runs down the left side and across the bottom of the stamp: “America’s light will shine over all the land.”

No errors of the $2 Kerosene Table Lamp are known.

But if you enjoy collecting misprinted stamps, which collectors call freaks, it can be fun to look for examples that show the circular orange flame misregistered in relation to the lamp’s glass chimney.

I don’t have any such freaks in my collection, but I’ve seen examples that show the flame well away from the center of the chimney. If you have an eye-catching freak of this stamp, you can send me a picture of it using the contact information at the end of this column.

While searching through my accumulated postal history of the $2 Americana, I was surprised to see that I didn’t have that many covers of particular note. Most were the kinds of uses one would expect: registered covers, parcel wrappers, and the like.

Among the more interesting items that turned up is the the U.S. Postal Service Express Mail service receipt illustrated nearby.

According to the third edition of U.S. Domestic Postal Rates, 1872-2011 by Beecher and Wawrukiewicz, this form “represents a receipt for service that indicates the postage and fee for the EM [Express Mail] item were paid by the addressee. That is, the indication of payment was not represented by stamps directly on the EM item but rather stamps on a receipt.”

In this case, an item weighing 14¼ pounds was sent May 8, 1981, from Pacific NW Bell in Portland, Ore., to Volt Tech Corp., the addressee, in Anaheim, Calif.

Evidence of the payment is shown by the stamps affixed to the form at lower right.

A pair of $2 Kerosene Lamp stamps combines with a block of four $5 Americana stamps and a pair of 25¢ Frederick Douglass stamps to pay all but 15¢ of the amount due.

Lack of space forced that 15¢ to the back of the receipt (not shown), in the form of a 10¢ Americana and a 5¢ George Washington from the Prominent Americans series.

Three strikes of a May 11, 1981, purple Anaheim circular datestamp canceled the stamps on the front of the receipt. The two stamps on the back are not canceled.

Overall, a somewhat more unusual use for a dollar-denominated stamp than one typically sees.

In my experience, international uses of the $2 Americana are most commonly seen on registered covers.

Pictured here is a representative example to a somewhat more uncommon destination: The Hague in the Netherlands.

Two purple mute oval registry markings cancel the stamps. A clear postmark below the stamps shows that the letter was mailed from Sioux City, Iowa.

Transit time to The Hague was a reasonable six days, as indicated by a Jan. 31, 1979, handstamp on the back of the cover.

An added bonus is the use of the $2 Kerosene Table Lamp slightly more than two months after its official first day. In fact, the early use was a motivator for me when I acquired this cover in 2000. I thought it a handsome cover then, and I still do today.

Please feel free to share your items and stories about U.S. dollar-denominated commemorative and definitive stamps. Write to Dollar-Sign Stamps, Box 4129, Sidney, OH 45365; or send an email to csnee@amosmedia.com. I look forward to hearing from you. Happy collecting!