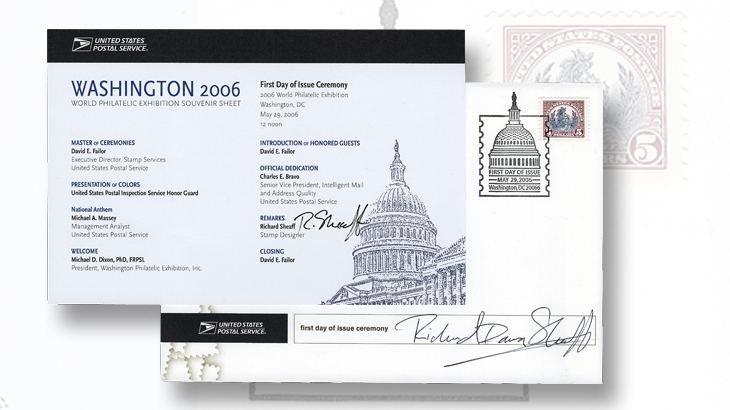 There will be plenty of opportunities to acquire free stuff at World Stamp Show-NY 2016.

For adult beginners and youth collectors, free “goodie bags” of stamps and other items will be available at the Welcome to Stamp Collecting Pavilion.

Some of the attending postal administrations from around the world likely will have a trinket or two, in addition to their latest stamps that will be available for purchase at face value.

Linn’s Stamp News will have three free daily issues at the show, Monday, May 30; Wednesday, June 1; and Thursday, June 2.

In addition, free copies of the May issue of Linn’s monthly magazine and May 23 Linn’s weekly will be available at our booth, No. 951. Be sure to stop by and introduce yourself.

Linn’s and Scott catalogs will produce the official show passport, which will be available free at the Linn’s/Scott booth and at other locations around the show. See the story on page 12 of the print version of our show preview.

And if you fancy yourself a fan of first-day ceremonies, there will be a number of such events for United States stamps to be issued at the show. Be sure to check the show schedule starting on page 20 to see which stamps are being issued each day.

In conjunction with the ceremonies, the U.S. Postal Service will provide a free first-day ceremony program to each attendee.

Each program card will list the ceremony schedule, along with all notable participants and guest speakers.

An envelope, franked with the issued stamp or stamps and canceled with the official first-day-of-issue postmark, conveniently houses the card.

If the Postal Service follows past practice, the ceremony envelopes will be passed out (one card/envelope per person) following the conclusion of the ceremony.

Many attendees will wait in line to have their programs and envelopes autographed by the guest speakers and postal officials who participated in the ceremony.

When I visited Washington 2006, the last international exhibition held in the United States, I attended the first-day ceremony for the $8 Washington 2006 souvenir sheet (Scott 4075) that was issued at the show.

Washington 2006 was held May 27 through June 3 at the Washington, D.C., Convention Center.

Prior to the ceremony, collectors speculated about whether or not the USPS would frank each ceremony program envelope with an intact Washington 2006 sheet.

As it turned out, the latter option was the one the Postal Service pursued, because it would not have been cost-effective to use a complete sheet on each program envelope.

I was fortunate to obtain a set of three Washington 2006 souvenir sheet ceremony program envelopes franked with the $1, $2 and $5 stamps. Each envelope contains an identical program card.

Pictured nearby are the card and the envelope bearing the $5 Freedom Statue stamp.

Richard Sheaff, who designed the sheet and spoke at the ceremony, signed both the card and the envelope.

Sheaff worked as an art director for the U.S. Postal Service from 1983 to 2008. During that time, he designed or guided the art development for more than 300 U.S. postage stamps.

It will be interesting to see if the Postal Service tries something new with its first-day ceremony programs and envelopes at the WSS-NY 2016 events.

In the meantime, start making your plans to attend what promises to be a fantastic international stamp show. I look forward to seeing you there.