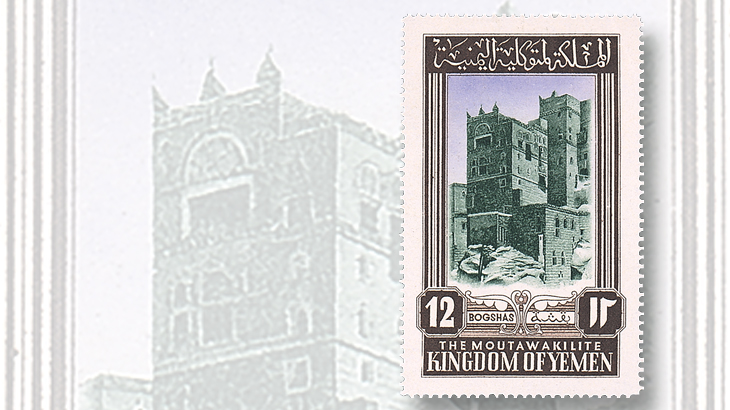 The Kingdom of Yemen 1952 Architectural History set of two stamps and two airmail stamps (Scott 78-79 and C10-C11) is in demand and a good buy in mint never-hinged condition at 2016 Scott Standard Postage Stamp Catalogue value of $35.

Yemen lies at the southern end of the Arabian Peninsula, bordering Saudi Arabia to the north and Oman to the east. Its strategic location on the Gulf of Aden and the Red Sea brought it into the sphere of the Ottoman Empire and later the British Empire.

In 1911, the Ottoman Empire recognized the Kingdom of Yemen in the northwestern highlands of the country. In 1962, the monarchy was abolished, and that part of the country became the Yemen Arab Republic (known unofficially as North Yemen).

Today Yemen is a failed state and the scene of an international power struggle as Shiite Houthis backed by Iran, Sunnis backed by Saudi Arabia and other Sunni Arab states, and Al Qaeda in the Arabian Peninsula battle for control of the country.

In 1952, the Kingdom of Yemen issued a set of two regular stamps and two airmail stamps (Scott 78-79 and C10-C11) commemorating the architectural history of the country. The stamps were issued both perforated gauge 14½ and imperforate. The 2016 Scott Standard Postage Stamp Catalogue values the set in mint never-hinged condition at $35. The set is currently in demand and is a good buy at or near Scott catalog value.