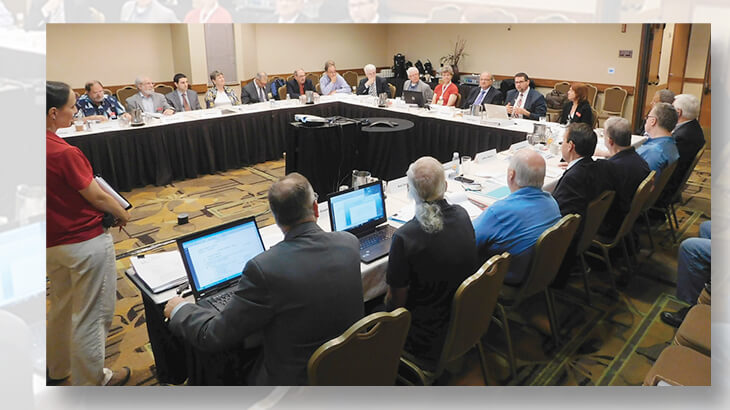 Members of the retiring American Philatelic Society’s board of directors sit with the incoming board during the Aug. 3 meeting in Portland, Ore. 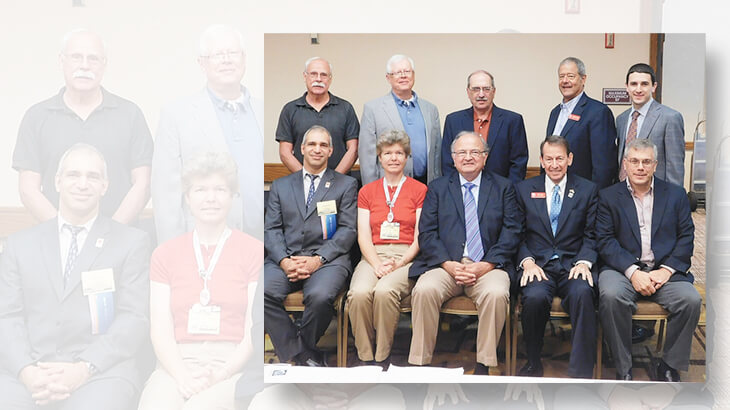 American Philatelic Society board members whose terms are ending in August met prior to the start of APS Stampshow in Portland. From left to right in the back row are secretary Ken Grant, treasurer Ken Nilsestuen, director Nick Lombardi, past president Wa 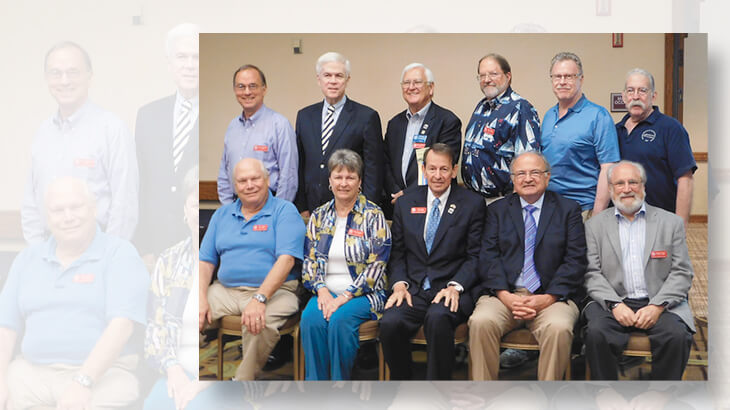 The future of the stamp hobby is a subject regularly addressed by the American Philatelic Society’s board of directors, and it was an undercurrent of the board’s Aug. 3 meeting in Portland, Ore., one day before the opening of APS Stampshow 2016.

Those participating discussed how stamp shows are changing, how the United States Postal Service’s involvement in shows might be changing, the state of the stamp business today, and how it might look tomorrow. And the overall well-being of the society is always closely considered by the board.

For the 11 members of the board it was a special event because it would be their last official full board meeting as a group, although a shorter joint meeting with the trustees of the American Philatelic Research Library would take place two days later.

Membership in this board is coming to an end for nine of the 11 board members, who were all serving the final days of their terms. Newly elected officers and directors would be installed Saturday, Aug. 6, at the APS general meeting.

Mick Zais will remain, moving from the board of vice presidents to the office of president, to which he was elected in June. And Stephen Reinhard will also stay on the board, transitioning from the position of president (he chose not to run for re-election) to that of immediate past president.

This meeting was also a bit unusual because all of the 11 members of the new board were present as well, and though they were not allowed to vote, the newly elected directors and officers already began contributing to the discussions of the many APS projects and activities already underway, and those still in the planning stages.

Yurchak acknowledged that the society is still a participant in a continuing court case.

The case was discussed in the closed executive session with the APS board, but in the general meeting Yurchak said only that APS member Donald Price is suing the society for breach of contract for a donation that he provided.

According to Yurchak, the case is in court on preliminary motion in Centre County, Pa., the state court in Bellefonte, where the APS is headquartered.

The society had previously budgeted for a $70,000 surplus by June 30, but surpassed that by showing a $115,000 surplus, Nilsestuen reported. Though expenses totaled $77,000 more than budgeted, the difference was offset by revenues that added up to $121,000 more than planned. The increase in revenues included advertising in the American Philatelist accepted during the 2016 APS election, and the lease of member mailing lists.

With library operations at $41,000 better than budget, the budget deficit for the American Philatelic Research Library, closely associated with the APS, was $56,000 rather than the expected $98,000.

The society’s detailed financial statements for June 2016 have been posted online.

Factors that have contributed negatively include $13,000 “worse than expected” figures for the 2016 APS Ameristamp Expo in Atlanta, Ga., and $20,000 in expenses associated with World Stamp Show-NY 2016. But the financial picture has been improving, Nilsestuen said.

“This board has accomplished a lot and the finance committee has participated in a lot of this,” Nilsestuen stated. “We know that the society is financially better off than it was three years ago — we have a stronger balance sheet than when this group first met.”

“The stamp business is very good right now,” Eric Jackson said to start off his report to the board, but he had some cautionary comments as well.

He pointed out that there is some dealer concern about traveling to Reno, Nev., in the winter. Reno is the site of the APS Ameristamp Expo taking place March 3-5, 2017.

Jackson also brought up that “the ranks of show dealers are shrinking.” His remarks set off several minutes of discussion among board members who share his concern, including vice presidents Alex Haimann and Yamil Kouri, and past president Wade Saadi. Haimann and Jackson both noted that there are younger dealers who are successful on the Internet but do not participate in shows. One proposal that was discussed suggested holding stamp show seminars for collectors who might have an interest in going into the stamp business as a show dealer.

Megan Orient also remarked briefly on Jackson’s comments about show dealers as she addressed the board.

“In addition to that,” she said, “our biggest partner, the U.S. Postal Service, is asking for change to our show.” She mentioned different factors driving that USPS request, including changes in the USPS budgetary model, and a desire to get in front of younger audiences with greater technology. The Postal Service has also asked about having a hand in the site selection process, Orient said.

She noted these and other factors will continue to impact the APS footprint at shows, including the number of dealers who will participate in future shows.

She proposed connecting with collector and dealer organizations as a group, such as the American Stamp Dealers Association and others, to take a look at the existing show models and consider options for the future.

APS Director of Education Cathy Brachbill spoke about several projects underway and how they are evolving, including the APS On the Road courses that provide philatelic learning opportunities at stamp shows.

The APS has also developed a small illustrated booklet for the Stamps Teach program to be used by educators in a regular classroom. The booklet, geared to grades 4-8, eventually will be offered online for teachers to download. Additional booklets are planned.

Wade Saadi, the past president of the APS and the president of World Stamp Show-NY 2016, gave his initial assessment of the success of the show. “New York 2016 was a very successful show by all measures,” Saadi said, noting that he considered it a fiscal success as well. “In general, it was very well received.” Additional details would be forthcoming, he added.

“Many dealers, the first day … they made their show,” Saadi said, meaning those dealers recovered their full show costs in the first day, with seven additional days still to come.

Saadi said the show attendance was being calculated by the number of registrants, rather than a count of persons entering the hall, which can wind up counting a single person multiple times as they enter and exit the hall for events in conference rooms, meals and for other reasons.

At the end of July, the APS had 30,020 members, 613 fewer than this time last year, reported APS executive director Scott English.

“July represented the eighth consecutive month of increased applications and to date, we have received 316 applications more than the same time last year,” he stated in a written report.

English also spoke about an experience he had being invited to speak to members of a Vallejo, Calif., coin club in September about the benefits of hobbies. He and director-at-large Kristin Patterson will discuss hobbies as a whole, and promoting them as a joint effort. English told the board he thought it was important to make that sort of outreach, and he’ll be making his presentation to a meeting of several Northern California coin clubs.

English said the coin club has been promoting the upcoming talk.

“I think this is really an opportunity for us to try to bridge the gap between the two hobbies … and see if we can start building some inroads into having a larger dialog and a larger partnership together,” English said.

“Although we are keeping pace with 2015 — we have not exceeded historical fundraising,” he wrote.

Speaking to the board about fundraising, he described it as a team effort and said, “I need help.”

Incoming APS president Mick Zais pointed out that other boards on which he has served depend upon its board members to contribute to fundraising efforts.

“We will continue working to build a stronger fundraising base this year and into next year,” English said in his written report.

Turning to World Stamp Show-NY 2016, English noted that “Historically, there has been a windfall for the APS and based on our conversations, I expect we will receive a dividend as a result of this show.

“When the time is appropriate, I would suggest to the board that we take this dividend and invest it, not in brick and mortar, but rather to address some opportunities from the show — specifically, a large database of people who attended the show, but are not currently in organized philately.”

English hopes to use the registration information to promote future events and to prospect for members.

With regard to the library, which has been undergoing a transition to its newly renovated space, English reported “We are nearing completion of the new library space and are going through the final inspections with local zoning in order to get an occupancy permit.”

English described a proposal to introduce a premium stamp sales option for higher end stamps, to be sold through a premium option on the society’s online stamp store. He also told the board that a survey process initially approved by the board in June is underway, with an initial survey already conducted in June, and focus groups that would be meeting at Stampshow.

Matt Liebson, chairman of the APS membership committee, described details of the Ambassadors pilot program, which is intended to work with the 480 local chapters that have joined the APS. Many members of local clubs affiliated with the APS are not themselves members of the APS. The Ambassadors program would designate a member of the club to provide regular updated information about the society, including the benefits and services provided by the APS.

A goal is to increase two-way communications between chapter members and the APS, Liebson noted, while the society provides regular information to support the ambassador’s efforts.

Initial plans call for a pilot program of 25 ambassadors from APS leadership, committees and community, as another link in the continuing effort to strengthen both the society and the stamp hobby as a whole.