Hotchner says Service Women FDC ‘one of the most spectacular I’ve ever seen’: U.S. Stamp Notes 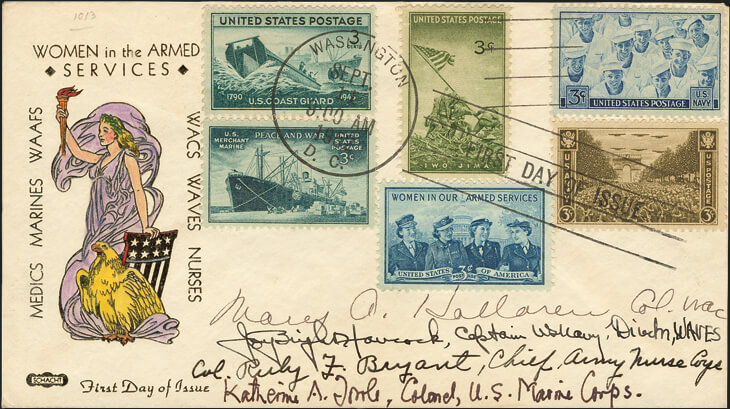 This first-day cover for the 3¢ Service Women stamp features a hand-colored Schacht cachet, other stamps honoring those who served in World War II, and autographs of the leaders of the women’s Army, Navy and Marine Corps components when the stamp was issu

Linn’s reader Alex Hall has come up with one of the most spectacular first-day covers for the 1952 3¢ Service Women stamp (Scott 1013) that I’ve ever seen.

In addition to the stamp and first-day cancel, this seldom-seen Schacht hand-colored cachet also bears the 1945-46 stamps honoring the other services that fought and died in World War II.

If the cover stopped here it would be a very nice addition to an FDC collection, but this cover has four autographs that match up with three of the services shown on the 1952 Service Women stamp: the Marine Corps, the Army and the Navy. The Air Force, which had become a separate service Sept. 18, 1947, also is represented on the stamp.

Not represented by an autograph on the FDC is Col. Mary Jo Shelly (1902-76), the second director of the Women in the Air Force (WAF), serving in that capacity during 1951-54. Even without that signature, this is an exceptional and historic cover.