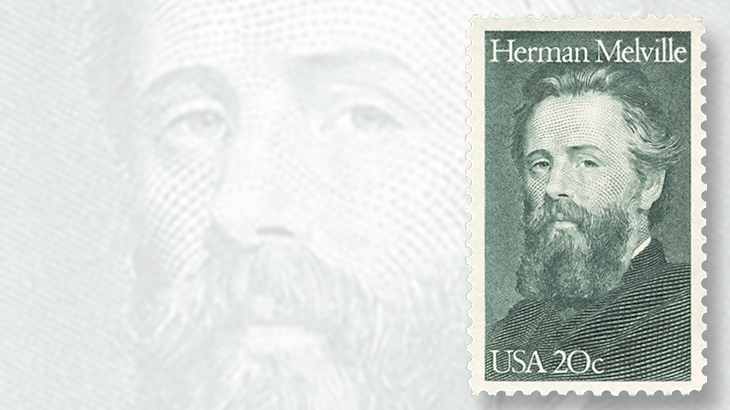 American author Herman Melville was honored on a 20¢ Literary Arts series commemorative in 1984.

It is hard to imagine that when Herman Melville, the author of Typee and Moby Dick, died 125 years ago, his passing was barely noticed, and his many works had mostly fallen out of print. A remembrance penned by an unidentified writer in The New York Times commented, “he has died an absolutely forgotten man.”

The Springfield Republican of Massachusetts concurred, stating that “He had long been forgotten, and was no doubt unknown to the most of those who are reading the magazine literature and the novels of the day.”

Herman Melville was born the son of a New York City merchant on Aug. 1, 1819. He became a sailor at age 20, but after working on a whaler in 1842, he jumped ship in the South Pacific, an act that would inspire Typee, his first novel, and quickly establish him as an accomplished writer of adventure stories set on the high seas.

The 1845 publication of Typee brought him great success, reinforced by the sequel Omoo two years later, but later works, even the mammoth classic Moby Dick in 1851, were less well received. By the end of the decade, Melville’s initial fame had faded, and he found employment as a customs inspector in New York.

Melville died at age 72 on Sept. 28, 1891, and some three decades would pass before academic interest in his novels, poems and short stories began to revive in earnest.