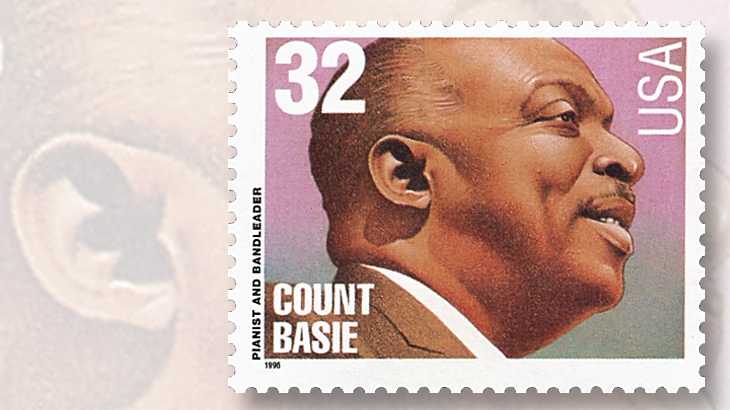 The 32¢ stamp honoring bandleader Count Basie was issued in 1996 in the Legends of American Music series.

William James “Count” Basie was born Aug. 21, 1904, in Red Bank, N.J. The jazz musician and bandleader learned piano as a youngster, and after a stint in vaudeville and playing in night clubs, he formed a swinging nine-piece band in Kansas City, and took it on the road.

The Count Basie Orchestra landed a deal with Decca Records in New York and began recording the hits that would bring the group and its leader international fame.

When the United States Postal Service issued the Big Band Leaders set of four 32¢ stamps on Sept. 11, 1996, it called Basie “the most enduring of all the Big Band leaders.”

“Basie’s first orchestra in the 1930s perfected the Kansas City style of jazz, a predecessor of the Swing Era. The orchestra became a permanent jazz institution with Basie as jazz’s elder statesman.”

The 32¢ Count Basie stamp (Scott 3096) is part of the Legends of American Music series.