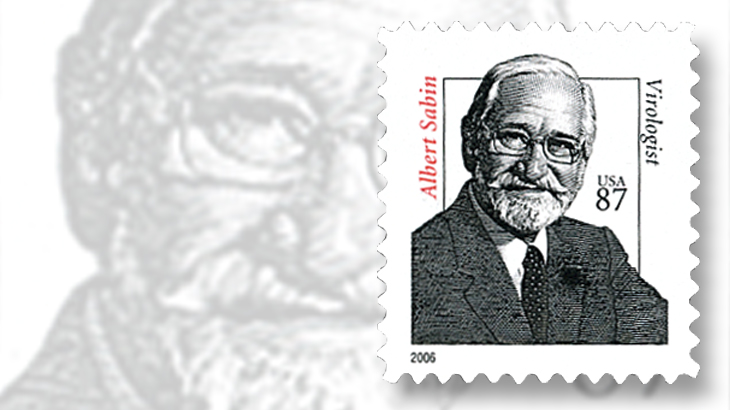 Albert Sabin, a leader in the fight against polio, was honored on an 87¢ stamp issued in 2006.

Albert Sabin, one of two scientists most closely associated with the near-eradication of polio in the world, was born Aug. 26, 1906, in Bialystok, Poland (then part of the Russian Empire). Sabin came to the United States in 1921 with his family, and earned his medical degree at the New York University College of Medicine in 1931.

Initially on the staff of the Rockefeller Institute for Medical Research, Sabin joined the Children’s Hospital Research Foundation in Cincinnati, Ohio, in 1939, where his studies of the polio viruses led to the development of an effective oral vaccine. Early tests of the vaccine were conducted in the Soviet Union, and in the 1960s the Sabin oral vaccine replaced the “killed virus” injectable vaccine developed by Jonas Salk and approved in 1955.

Sabin received the National Medal of Science in 1970, and the Presidential Medal of Freedom in 1986.

In his later years, Sabin was a consultant to the U.S. National Cancer Institute, and a research professor at the Medical University of South Carolina.