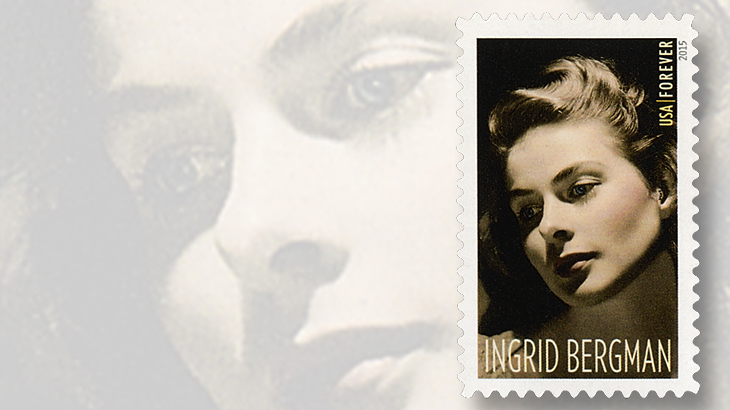 The Ingrid Bergman forever stamp in the Legends of Hollywood commemorative series was issued in 2015 for the Swedish-born actress' birth centenary.

A brief biography printed on the stamp pane reads, “Ingrid Bergman (1915-1982) lit up the silver screen for decades, starring in a variety of European and American films. She won three Academy Awards, two Emmy Awards, and the Tony Award for Best Actress. She is best remembered for her timeless portrayals of Ilsa Lund in Casablanca (1942), Paula Alquist in Gaslight (1944), Anna Koreff in Anastasia (1956), and Alicia Hubermann in Notorious (1946).”

Bergman’s parents both died before she entered her teens, and she was raised by an uncle and his family. She was a well-known actress in Sweden when she was cast in the role of Anita in the American version of Intermezzo: A Love Story in 1939. She had taken the same role in a Swedish version of the film just three years earlier.

Intermezzo introduced Bergman to American audiences, and the great success of the film made her a star.

She appeared in three new films in 1941 before completing Casablanca, which was a hit when it was released and remains an immensely popular classic 75 years later.

During her long career she also made films with directors Alfred Hitchcock, Ingmar Bergman (no relation), Jean Saks and others.

Along with her film career, Bergman performed on stage in London and elsewhere, and she also accepted occasional television roles.

The 2015 Ingrid Bergman forever stamp was a joint issue with Sweden.

Shirley Temple to be honored on 20th Legends of Hollywood stamp