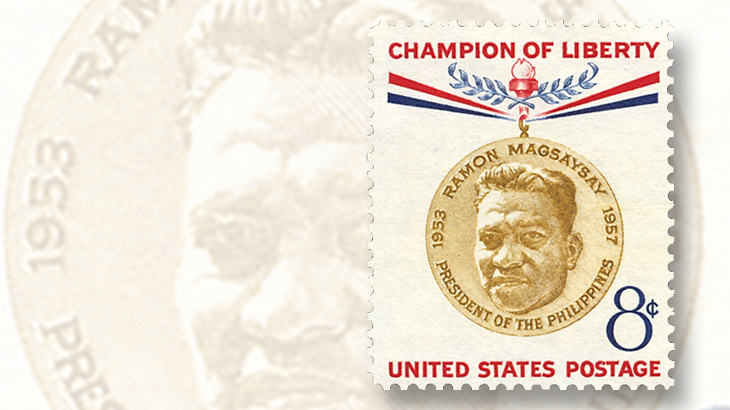 President Ramon Magsaysay of the Philippines is honored on an 8¢ stamp in the Champion of Liberty series.

Ramon Magsaysay, who served as president of the Philippines from 1953 until his death in 1957, was honored on an 8¢ United States stamp issued Aug. 31, 1957 (Scott 1096). The stamp was the first issue in the Champions of Liberty commemorative series, which honored political figures from other countries.

Ramon del Fierro Magsaysay was born Aug. 31, 1907, in Iba, a coastal city in the Zambales province of the Philippines. During World War II, Magsaysay was a soldier in the Philippine Army, fighting Japanese forces. After the war he was elected to the Philippine House of Representatives, and as secretary of defense he was instrumental in neutralizing the threat of a government overthrow by Huk guerillas.

He was elected president in 1953 and earned a reputation as an ally of the United States and a reformer not influenced by corruption.

On March 17, 1957, the popular president died with 24 other passengers in a plane crash as he was returning to Manila following a series of public appearances. Magsaysay was 49 years old.