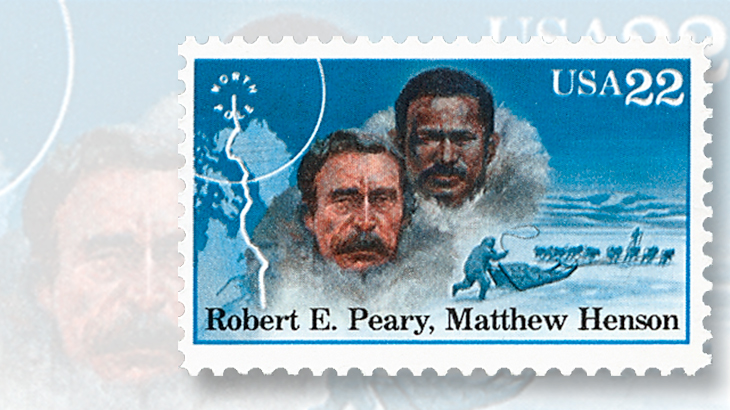 Matthew Henson is honored alongside Robert E. Peary on a 22¢ commemorative issued in 1986.

Two American men are most often credited as the first to reach the North Pole, in 1909: Adm. Robert Edwin Peary (1856-1920), and explorer Matthew Alexander Henson, who had been Peary’s indispensable aide for many years.

Henson was born Aug. 8, 1866, in Nanjemoy, Md., the son of free black sharecroppers who both died before Matthew reached the age of 10. At age 12 he began six years as a cabin boy in the service of Capt. Childs on the Katie Hines. He left the sea after Childs died, eventually becoming a store clerk in Washington, D.C., when he met Peary, who hired him for an expedition to Nicaragua to survey for a canal connecting the Atlantic and Pacific Oceans.

Henson’s sea experience, his capability as a carpenter and his strength of character made him an invaluable member of Peary’s crew. The two remained together through several expeditions to Greenland and the arctic circle, eventually setting out to conquer the North Pole.

They reported reaching the pole in 1909, but reports of an earlier success by Dr. Frederick A. Cook and later questions about whether Peary and Henson actually reached the pole have never been definitively resolved.

Peary and Henson are honored together on a 22¢ commemorative stamp issued May 28, 1986, as part of the Arctic Explorers set (Scott 2223).