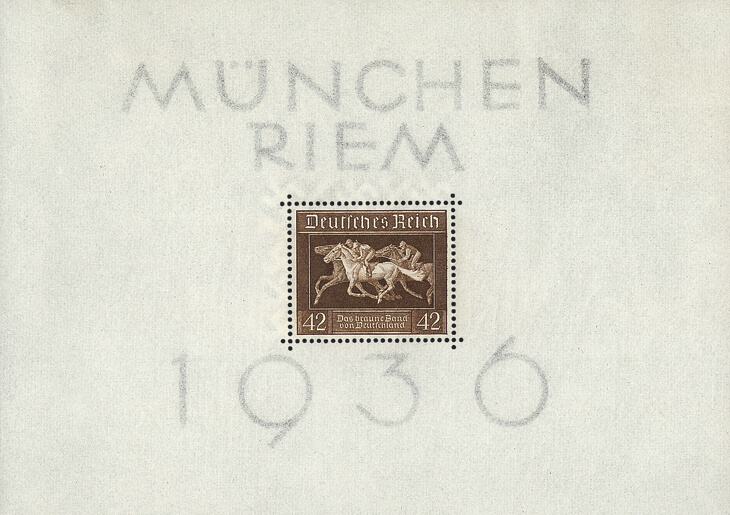 Germany’s first Brown Ribbon race semipostal issue was a souvenir sheet with a single stamp issued June 22, 1936. This race was held near Munich. 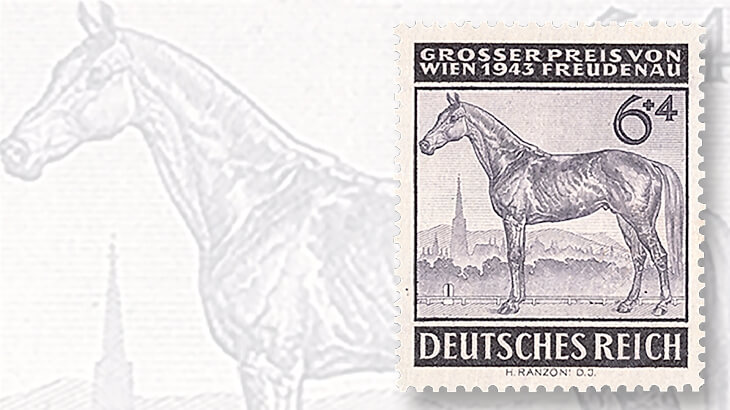 Semipostal stamps of two different denominations and the same design were issued in 1943 to support the grand prize of the Freudenau, Vienna, horse race. The 6-pfennig+4pf stamp is shown; the other stamp is denominated 12pf+88pf. 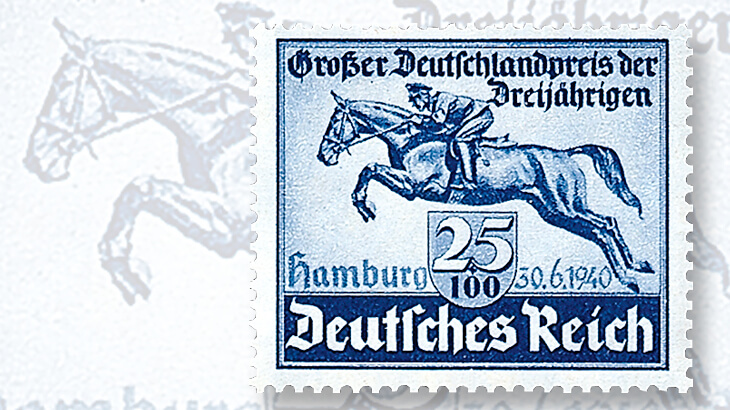 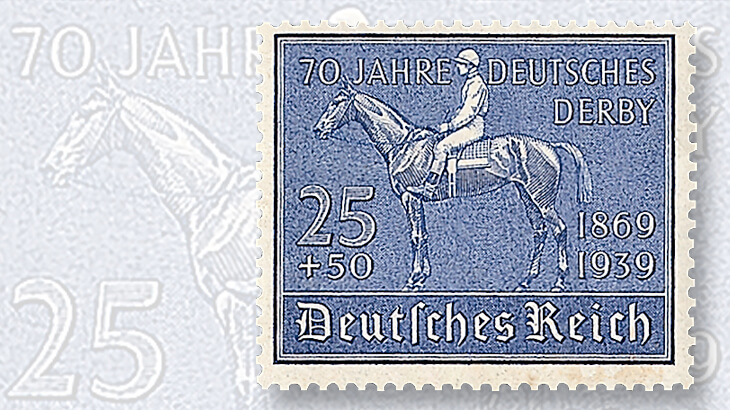 Proceeds from the surtax on the 1939 semipostal stamp for the 70th running of the German Derby were split between the race promoters and Hitler’s National Culture Fund. 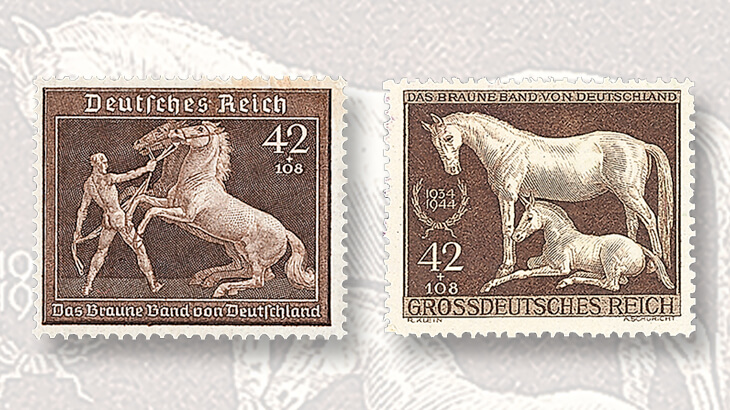 The Brown Ribbon semipostals issued from 1939 through 1944 displayed a variety of artistic designs. For example, the 1939 stamp shows a man holding the reins of two rearing horses, and the 1944 stamp depicts a race horse and foal. 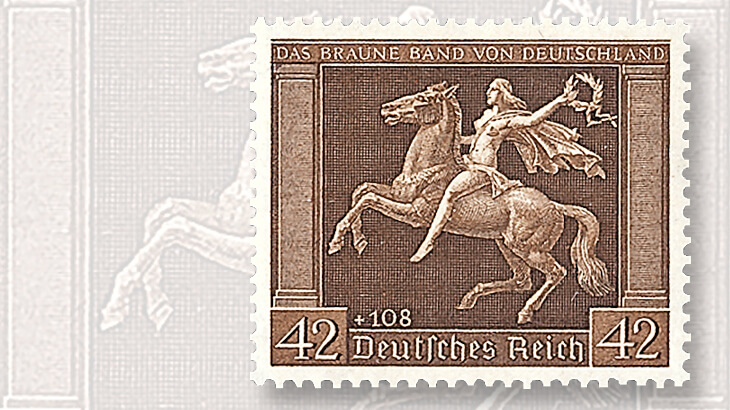 A female allegorical figure of victory on horseback adorned the semipostal stamp for the 1938 Brown Ribbon race. 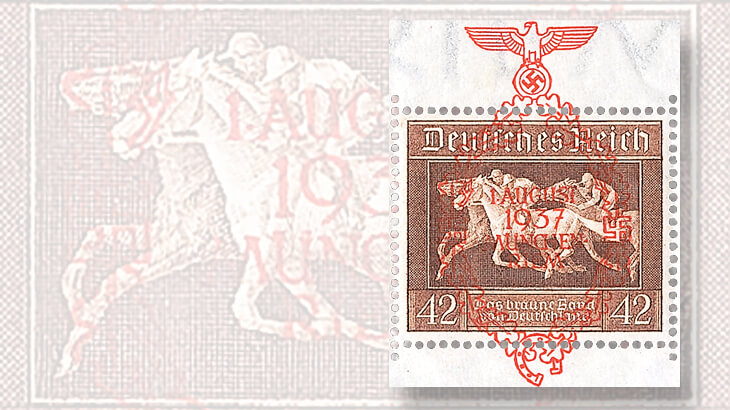 An overprinted version of the 1936 souvenir sheet was issued Aug. 1, 1937, for that year’s Brown Ribbon horse race. The overprinted stamp from the sheet is shown.
Previous
Next

Many countries have issued semipostal stamps since the first were released by New South Wales in 1897.

The causes that these stamps have supported with their surcharge in excess of the postage fee have included fighting tuberculosis, aiding war wounded and orphans, and providing aid to victims of natural disasters such as hurricanes, floods and even a plague of locusts.

Among the more unusual semipostal stamps are those that helped to fund horse racing. Over the nine-year period from 1936 to 1944, during the Third Reich era in Germany, a semipostal stamp was issued each year to support the Brown Ribbon (Braune Band), an annual horse race held near Munich.

The surtax on these semipostal stamps usually went to pay for the event or to provide the funding for the sweepstakes prize. A part also went to Hitler’s National Culture Fund, used primarily to help fund the construction of new buildings in Berlin.

The Brown Ribbon race was for 3- and 4-year-old horses over a distance of 1.5 miles. The race was initiated in 1933 during the first year of the Third Reich as a kind of Nazi Derby — the title “Brown Ribbon” coming from the color of the uniform of the paramilitary wing (the Sturmabteilung) of the party.

The Brown Ribbon was held in July at the race track in Riem, one of the best known racing venues in Germany and located just a few miles from Munich. A variety of events, including track racing, hurdles and even steeplechase, were held as part of the Brown Ribbon.

The first semipostal stamp associated with the Brown Ribbon Derby was issued June 22, 1936, as a single-stamp souvenir sheet (Scott B90) to commemorate the third running of the race.

These sheets were sold for 1.50 marks at the race course and selected post offices. The 1.08m surtax on each 42-pfennig stamp was to go toward a sweepstakes prize of 100,000 marks. “Munchen Riem 1936” appeared as a watermark in the sheet margin.

In 1937, for the fourth running of the Brown Ribbon, the souvenir sheet from the previous year was overprinted with “1 AUGUST/1937/MUNCHEN-/RIEM” inside a wreath of oak leaves surmounted with an eagle atop a swastika (Scott B105).

The Brown Ribbon semipostal stamp for the fifth running was issued July 20, 1938, and portrays the goddess of victory mounted on a rearing horse and holding aloft a triumphal wreath (Scott B119).

The annual issuing of a semipostal stamp associated with the Brown Ribbon horse race continued for 1939 through 1944, the sixth through 11th runnings. The subjects of the stamps are as follows: 1939, man holding reins of two rearing horses (Scott B145); 1940, ancient warrior holding wreath of victory and riding in a chariot drawn by three horses (B173); 1941, two Amazons, with shields and spears, riding galloping horses (B192); 1942, three racing horses with ribbon banner of the Braune Band curling around them (B205); 1943, man in hunting garb on horseback blowing a hunting horn (B243); and 1944, white race horse with foal (B283).

In addition to the semipostals supporting the Brown Ribbon, semipostal stamps were issued between 1936 and 1944 for several other German national horse races.

The first was issued on June 18, 1939, for the 70th anniversary of the German Derby (Scott B144). This race for 3-year-old thoroughbred colts and fillies was run at Hamburg.

The Scott Standard Postage Stamp Catalogue identifies the stamp design as portraying a race horse named “Investment” with a jockey. The 50pf surtax went to the race promoters and Hitler’s National Culture Fund.

During World War II, the German Derby became known as the Grosser Deutschlandpreis der Dreijahrigen um Das Blaue Band, loosely translated as the “Greater Germany Sweepstakes of Three-Year-Olds in the Blue Ribbon” race. Semipostal stamps were issued for the 1940-42 races, which were run in Hamburg.

All three stamps (Scott B172, B191 and B204) carried a 100pf surtax that went to Hitler’s National Culture Fund. In 1943 and 1944, the race was relocated to Hoppegarten, outside the gates of Berlin in the state of Brandenburg, and no further stamps were issued for it.

Two semipostal stamps (Scott B244-B245) were issued Aug. 14, 1943, in association with a horse race known as the Grand Prize of Vienna at Freudenau. The Galopprennbahn Freudenau race track, in the port section of Vienna, was built in 1839 by the Vienna Horse Racing Society, with the Imperial Box and covered grandstands added in 1870.

The incorporation of Austria into the Reich (Anschluss) in March 1938 led to the inclusion of this 1943 Austrian race in the semipostal stamps of Germany.

During the years of the Third Reich, horse racing was a popular spectator sport in Germany.

The races were major social events, much as the Kentucky Derby is in the United States, and large numbers of people attended the national races, even in the waning days of WWII when going to large public events was dangerous because of Allied bombing raids.

The collapse of the Third Reich in 1945 put an end to German semipostal stamps benefiting the unusual cause of horse racing.